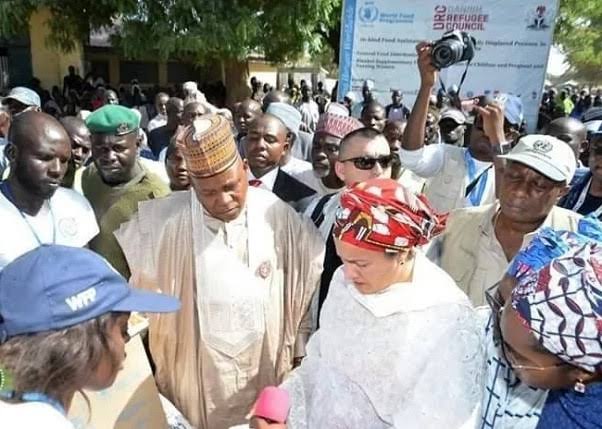 She arrived in Maiduguri, the Borno State capital on board a UN jet, and immediately flew to Banki.

The deputy secretary-general was accompanied by the UN Humanitarian Coordinator in Nigeria, Edward Kallon, other principal officers, and Borno State Governor, Babagana Zulum.

Addressing journalists in the state, Mohammed said her mission was to assess the government’s responses to the humanitarian crisis in the northeast with the intention of amplifying priorities.

“Coming to Borno was very specifically for people to understand that in the context of Nigeria, there is still an ongoing challenge with some areas of Borno State in post-conflict, and many areas under the threat of the Boko Haram insurgency,” she said.

“Our visit to Banki was to see the collaboration with Cameroon in a camp and that collaboration with the Borno State Government and the UN, how that is evolving first in meeting the needs of those that have found themselves displaced and those that are coming back across the border and really finding a pathway for that resettlement and reintegration of the people of Borno State to a life of peace and prosperity.”

According to her, the camps visited were overcrowded and feelers from interactions with the people indicated the desperate desire to return to their homes and live normal lives again.

On his part, Governor Zulum said the state government is working with the Federal Government to commence the repatriation of citizens from Cameroon latest on December 5.

The governor asked all partners to support the state government as it drives responses to the humanitarian crisis.

“I am very happy to inform you that we are gradually having peace restored and with the restoration of peace we have received overwhelming requests by our people to return to their places of origin these processes of return are being carefully planned to take into account all the factors such as security, livelihoods, and continuous presence of civil authority to restore confidence in the communities,” he said.

“Despite the challenges of the COVID-19 pandemic, we have had great success in returning people to areas that are confined to be safe.

“We call on all our partners to put the government of Borno in the driving seat of support being given out in order to gain sustainability and lasting impact.”

UN Concerned About ‘Xenophobia’ Against Migrants In Chile