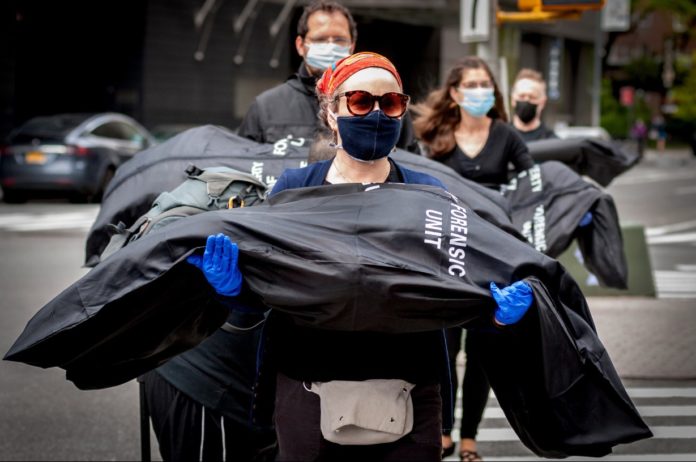 From the first deaths in February, as President Trump still predicted none, the U.S. has reached 100,000 lives lost to the COVID-19 pandemic

WASHINGTON — The nation’s coronavirus death toll surpassed 100,000 in less than four months on Wednesday, a heart-rending inflection point in a pandemic that has profoundly altered Americans’ daily lives, ravaged the U.S. economy and put the country’s bare-knuckle political disunity on display for all the world to see.

The first U.S. death was reported Feb. 29, a patient in the Seattle area, but several earlier fatalities — not attributed at the time to COVID-19, the illness caused by the coronavirus — have since come to light. Today, the United States, despite its wealth and scientific prowess, has the world’s highest numbers of both cases and deaths, according to Johns Hopkins University’s widely cited global tracker.

The efforts to contain the contagion have closed businesses, sent unemployment to Depression-era levels, spurred Congress to pass four relief measures totaling nearly $3 trillion, with more promised, and upended the year’s political contests for the White House and control of Congress.

The loss of lives reflected in the tragic new milestone has put President Trump’s reelection at risk, as numerous polls show widespread belief among voters that he has mismanaged the crisis — from his early denials of a problem and promise of zero deaths to his erratic stewardship of the response once the death count began.

Spurred partly by Trump’s defiant rhetoric and example, even the responses recommended by his own public health experts — social distancing, wearing masks, staying home — have come to divide Americans along partisan lines after an initial period of broad adherence to the unprecedented limits on their way of life. He has urged the nation to “reopen” and has consistently refused to wear a mask in public, going so far as to mock his Democratic rival for the presidency, former Vice President Joe Biden, for doing so at a Memorial Day observance.

Yet the state and local efforts nationwide since mid-March to limit social interaction, to shutdown schools and all but essential businesses and to encourage millions of Americans to work from home did limit the spread of infections, studies and disease models suggested. In mid-May, a research team at Columbia University reported that if such measures had been taken a week earlier, about 36,000 fewer people would have died; had the restrictions been imposed two weeks earlier, on March 1, about 54,000 fewer deaths would have occurred.

In early March, however, Trump was opposed to such steps. On March 9 he suggested in a tweet that the coronavirus infection was no worse than a seasonal flu and added, “Nothing is shut down, life & the economy go on. At this moment there are 546 confirmed cases of CoronaVirus, with 22 deaths. Think about that!”

Unrepentant about such statements, on Tuesday the president claimed without evidence on Twitter that but for his early actions to restrict travel from China, 1.5 million to 2 million lives would have been lost.

As elsewhere in the world, elderly people and those rendered vulnerable by preexisting medical conditions have accounted for most U.S. deaths. But the virus has sickened all age groups, including children afflicted by what remains a little-understood inflammatory syndrome.

Quickly, New York City became the nation’s focal point of disease, and Los Angeles was an early hot spot as well, partly reflecting both cities’ status as hubs of international travel. After New York’s springtime season of death — marked by the sight of refrigerated trucks serving as temporary morgues and drone footage of mass graves on an island that typically was a repository of unclaimed dead — New York’s Gov. Andrew Cuomo saw progress Saturday as the state reported daily deaths Friday had dropped to 84, the first day since late March that the toll dipped below 100.

Since mysterious cases of pneumonia began surfacing in the Chinese city of Wuhan late last year, the coronavirus has hopscotched the globe, with more than 5.6 million confirmed cases and more than 350,000 deaths worldwide. Initial attempts at secrecy by China’s authoritarian government stifled early efforts to understand and contain the virus.

By mid-February, the outbreak had leaped from Asia to Europe, where it began devastating northern Italy before spreading to Spain, France and elsewhere. A deadly flare-up raged in Iran. Countries began imposing travel bans, but not before international travelers — continent-hopping businesspeople and tourists, cruise-ship passengers and crews — seeded far-flung eruptions of disease.

The virus’ rapid spread was met with a hodgepodge of efforts to contain it, a worldwide phenomenon that was echoed in the patchwork of responses in U.S. states. Success varied widely. As hospitalizations and deaths accelerated, Trump veered from claiming absolute authority to telling states to largely fend for themselves in providing testing and crucial medical supplies.

By mid-March, the world was locking itself down. Across the United States, schools closed, workplaces emptied, businesses shuttered. The stock market cratered, wobbled, spiked, then ebbed anew, as traders repeatedly seized on any report of a potential treatment or vaccine to send stock-buying up even as the losses of jobs and lives mounted.

Healthcare workers, from doctors to hospital cleaners to nursing home aides, found themselves on the pandemic’s front lines, with some of them documenting firsthand the agony of watching patients die, separated from their families by strict protocols meant to stem new infections. Working-class Americans including grocery clerks, bus drivers and meatpackers were called “essential” workers but realized that their jobs put them at previously unimaginable peril.

As the nation neared the threshold of 100,000 deaths over a week that included Memorial Day, when the nation mourns its war dead, the somber symbolism was lost on few. Among the victims have been many aged veterans.