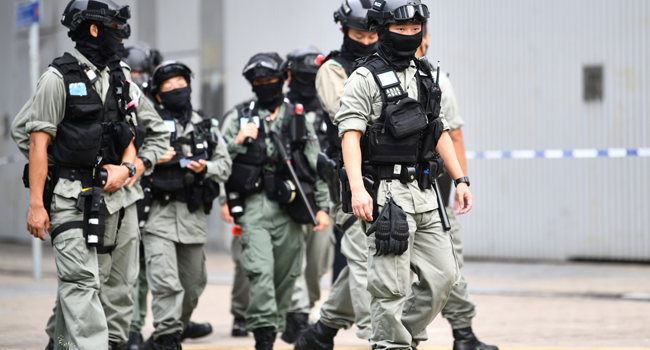 Hong Kong police ramped up security around the city’s legislature on Wednesday ahead of a debate over a law that would ban insulting China’s national anthem, the latest measure activists say is chipping away at free speech in the finance hub.

That move has prompted Washington to warn that Hong Kong might lose its status as a global financial centre if the city’s freedoms and vaunted judicial independence are swept aside by Beijing.

Under a deal agreed with Britain before the city’s return to China, Hong Kong is supposed to be guaranteed certain liberties until 2047 that are denied to those on the mainland.

The legislature — known as LegCo — was trashed by protesters early on during last year’s protests as authorities tried to fast-track an eventually scrapped bill allowing extraditions to the authoritarian mainland.

Police were taking few chances ahead of Wednesday’s debate.

A police source told AFP that “thousands” of officers had been placed on standby ready to respond to any attempts to block traffic outside the legislature or breach the building.