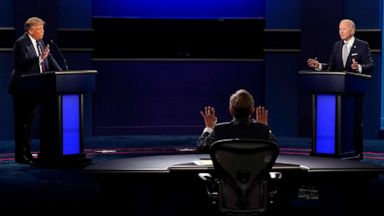 In Cleveland, Ohio, last night, two geriatric white men took to the stage to make a case for their suitability to lead the world’s largest economy. Within the first 20 minutes, however, both candidates, incumbent Republican Donald Trump, 74, and Democratic candidate Joe Biden, 77, were embroiled in a heated exchange with both candidates speaking over each other, even as debate moderator Chris Wallace struggled to gain control of his theatre. Mr Trump, belligerent and disruptive, was quick to get under Mr Biden’s skin so much so the usually mild-tempered former vice president snapped, “will you shut up, man!” All expectations of dignity as befitting the hallowed offices of the presidency were thrown out in what can only be described as the messiest presidential debate in recent American history.

At the end of the 90-minutes debate, neither candidate was able to truly make a strong case in support of his party’s ideals or possibly canvas new converts to boost his candidacy. Coming into the debate, Mr Wallace, a veteran Fox News anchor, set up a six-agenda plan designed to address key issues of concern to Americans in the upcoming Elections. With pressing issues like the COVID-19 pandemic that has resulted in the deaths of about 207,000 Americans and the consequential effect on the economy, millions of people tuned in to watch the debates with the expectation that the contenders would show a pathway to America’s recovery. And while the debate moderator tried valiantly to steer both candidates back to his agenda, the exchanges became a little more than the base trading of insults and snide remarks, mostly instigated by President Trump.

Much like his style in 2016, both in the Republican Party debates and the main presidential elections debate, Mr Trump defied debate rules, often using crude or abusive language as he ploughed his way through. President Trump of 2020 remained very much true to candidate Trump of 2016, if not worse.

The Supreme Court judge nomination and the issues of race protests and violence in U.S. cities brought up some of the most heated exchanges for the night. President Trump made a case for his recent nomination of Amy Barrett to replace the recently deceased Judge Ruth Bader Ginsburg, a process which has seen the Republican-led Senate rushing through a nomination and vetting process before the November 3 elections.

“I will tell you very simply, we won the elections. Elections have consequences, we have the Senate, we have the White House … therefore we have the right to choose her,” the president said.

Mr Biden countered, arguing that Ms Barrett’s nomination would have a significant impact on thorny issues like the Affordable Care Act, an Obama-era healthcare plan which Mr Trump seeks to undo, and Roe vs. Wade, which signifies the 1973 Supreme Court ruling that accorded abortion rights to women. Democrats have argued that rather than let the current administration replace the Supreme Court judge with a conservative candidate, effectively tilting the highest court in favour of Republicans, the American electorate be allowed to decide, through their choice of a president, such weighty policy outcomes.

The most contentious issue of the night came as President Trump declined to immediately condemn right-wing extremism and white-supremacist groups. In response to a direct question about race relations in the country and whether he would directly condemn right-wing groups and militia, the president addressed a far-right organisation known to support him: “Proud Boys, stand back and stand-by. But I’ll tell you what, somebody’s got to do something about antifa and the left, because this is not a right-wing problem. This is a left-wing problem.”

The heated segment on race relations covered such issues as the recent White House memo to end racial sensitivity training in government establishments as well as the disproportionate police violence against black people.

“This is a president that has used everything as a dog whistle. To try to generate racist hatred, racists division… he riles things up, he does not want to calm things down. Instead of going in and talking to people… he just puts gasoline in the fire,” the former vice-president accused.

In response, President Trump accused the Obama administration of causing race tensions in the country and then recounted the number of endorsements he’d received from law-enforcement groups across the country. “We just got the support of 250,000 military leaders and generals. Law enforcement, almost every law enforcement group in the United States. I have Florida, I have Texas, I have Ohio,… Portland… I don’t think you have any law-enforcement [support]… Name one group that supports you.”

Ultimately, the American electorate may have tuned in to the debates in hopes of tangible, policy-focused exchanges, but the outcome elicited a collective expression of disappointment, as observed across social media platforms.

If anything, debate moderator Wallace echoed the thoughts of many viewers, tired of the juvenile exchanges. He admonished both candidates to respect the terms of the debate but specifically addressed the president: “Frankly, you’ve been doing more interrupting.” At some point, the unflappable news anchor had had it with the president.

“Can I be honest,” President Trump asked in the middle of another heated exchange, as he tried to continue speaking out of turn. “No,” an exasperated Mr Wallace responded.