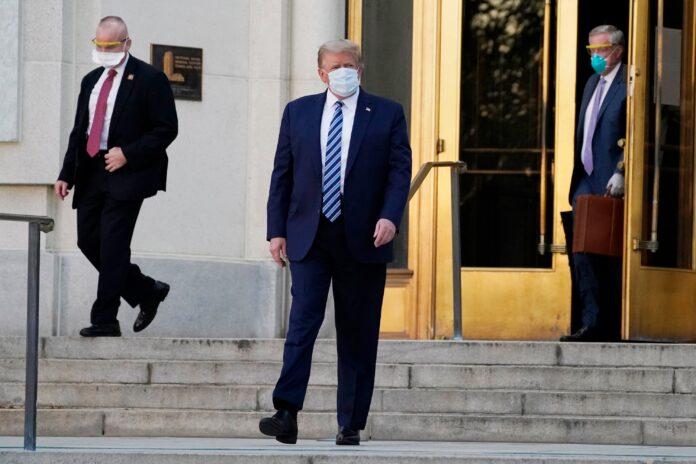 President Donald Trump announced he is leaving the hospital Monday where he received emergency treatment for Covid-19, telling Americans, who’ve seen nearly 210,000 people die from the virus this year, that they have nothing to worry about.

Trump’s Twitter statement, declaring himself rejuvenated and telling Americans “don’t be afraid of Covid,” came hours after his own chief spokeswoman tested positive for the virus — the latest in an outbreak raging within the White House.

“Don’t be afraid of Covid. Don’t let it dominate your life. We have developed, under the Trump Administration, some really great drugs & knowledge. I feel better than I did 20 years ago!”

The 74-year-old Republican, who faces an uphill reelection battle against Democrat Joe Biden in less than a month, has been doing everything to try to project strength and confidence since his hospitalization Friday.

But a combination of White House secrecy, conflicting information from officials and the outbreak in Trump’s own staff and political circle has undermined his credibility.

In a briefing from the hospital, presidential physician Sean Conley said Trump is in good shape again, following an aggressive cocktail of therapeutic drugs.

But Conley said Trump would not be “entirely out of the woods” for another week and he conceded that the mix of medicines meant “we’re in a bit of uncharted territory.”

Once in the White House, it’s not clear how free Trump will be to move about. The facility has a large medical team of its own which will monitor the president in case of relapse.

Doctors say Trump is being given the steroid dexamethasone, usually associated with serious Covid-19 cases, and two experimental therapeutic drugs. In another sign of how serious his bout with Covid was, at least initially, doctors say that he was given extra oxygen on Friday — a fact they initially omitted.

Despite Trump’s characteristic claim that Covid-19 should not be of major concern, polls show it is a huge worry for Americans. His widely panned handling of the crisis this year is also reckoned to be the main reason Biden, 77, is surging in polls ahead of the November 3 election day.

The United States has the biggest reported toll of any country in the global pandemic.

Illustrating the divide between the reality described by health experts and the Trump White House’s defiance, Press Secretary Kayleigh McEnany became the latest to announce a positive test result on Monday.

Other positive cases close to Trump now include his wife Melania, his close aide Hope Hicks, his campaign manager Bill Stepien, two of McEnany’s assistants according to US media, and more than half a dozen others from the president’s circle both inside and outside the White House.

Beset by revelations that he avoids paying almost any income tax and a slew of other scandals, Trump was already behind Biden when he fell ill.

But the biggest liability in his scramble for a second term was always his handling of the pandemic.

For months, Trump has given the appearance of trying to wish away the catastrophe and get back to his reelection narrative of a strong economy.

Trump now looks poised to try and claim that in getting quickly out of hospital he has personally vanquished the virus — and will go on to do the same for the rest of the country.

Trump is “battling as tough as only President Trump can,” campaign spokeswoman Erin Perrine said on Fox News.

For all of Trump’s determination to reassert himself, he has already lost several precious days of a campaign that revolves heavily around his large-scale rallies and image of personal strength.

On the day he announced his positive test he had been due to hold a rally in Florida. The next day he was to have flown to another important battleground, Wisconsin, ignoring the fact he was to gather crowds in one of the worst coronavirus hotspots in the country.

Biden meanwhile has maintained his slow-but-steady campaign which has always emphasized health precautions — a pared-back style that Trump calls weakness and mocked as recently as last week. The Democrat was in Florida on Monday.

The upheaval has led to an unusual interest in this Wednesday’s televised debate between the vice presidential candidates — Republican Mike Pence and Biden’s pick, Kamala Harris.