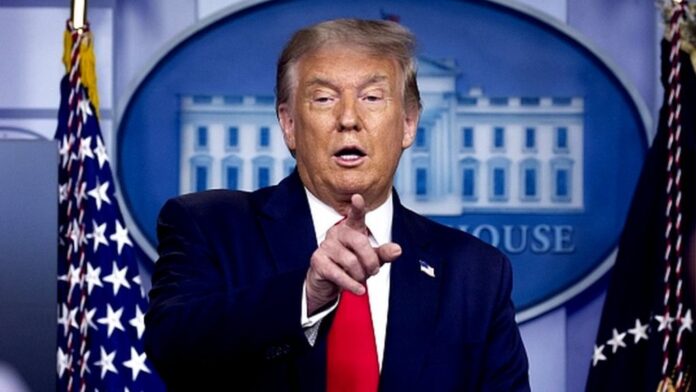 U.S. President Donald Trump has mocked Democrats over their criticism of his plan to put forward a Supreme Court nomination as soon as possible.

“Did you hear, today, the latest? They impeached me for a perfect phone call.

“Now they want to impeach me again if I nominate somebody as I’m constitutionally obligated to do to serve on the Supreme Court of the U.S.,” Mr Trump said.

Speaking in Dayton, Ohio, Mr Trump said he was going to announce his Supreme Court nominee on Saturday, or maybe even as early as Friday.https://tpc.googlesyndication.com/safeframe/1-0-37/html/container.html

“It will be a brilliant person, I have five [people] that we’re vetting right now … it will be a woman,” Mr Trump said.

Colorado Republican, Cory Gardner said that he was ready to vote on Mr Trump’s Supreme Court nominee and would vote to support the president’s pick if the nominee is qualified.

“When a President exercises constitutional authority to nominate a judge for the Supreme Court vacancy, the Senate must decide how to best fulfill its constitutional duty of advice and consent,” Mr Gardner said.

Mr Trump said earlier on Monday that he may choose his nominee for the U.S. Supreme Court by the end of the week and is considering picking from a list of five women candidates to replace the deceased justice Ruth Ginsburg.

The president reiterated that he wants to see a vote on his U.S. Supreme Court nominee at the Senate before the November 3 presidential election.

He added that he had already spoken to some of the candidates and plans to hold more meetings soon.

According to U.S. media reports, Mr Trump has met with Judge Amy Coney Barrett, 48, who is a circuit judge on the US Court of Appeals for the Seventh Circuit in Chicago.

Colorado Judge Allison Eid is also among those on President Trump’s short list for the Supreme Court nomination.

On Friday, U.S. Supreme Court Justice Ruth Ginsburg died of complications from metastatic pancreatic cancer at her home in Washington.

Senate Majority Leader Mitch McConnell said on Friday that the Senate would vote on Mr Trump’s pick to replace Ginsburg regardless of criticism by Democrats who are calling for a postponement of the vote because of being in an election year.