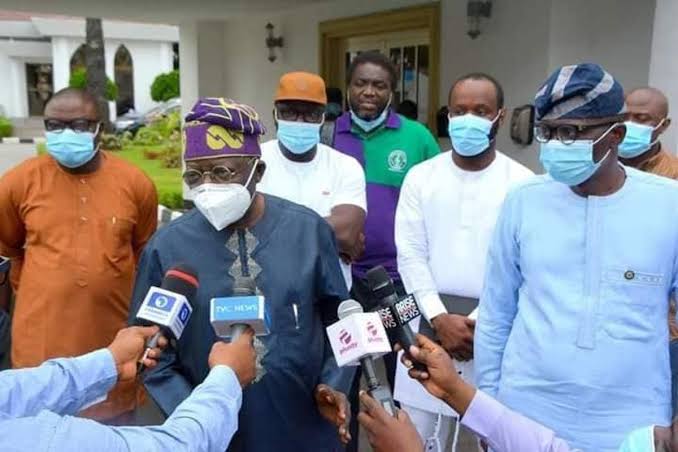 The National Leader of the All Progressives Congress (APC), Bola Tinubu, has called for a thorough probe into the shooting of #EndSARS protesters in the Lekki area of Lagos State.

“Those who suffered casualty during the gunshots (Lekki shooting) need to answer some questions too,” Tinubu said on Saturday during a visit to the Lagos State Governor, Babajide Sanwo-Olu.

The former governor added, “Even though we want to help, we still must extract information that will help the government to prepare in future and understand how and when to react.”

While noting that those who have suffered one form of abuse from the defunct Special Anti-Robbery Squad (SARS) would get justice, Tinubu expressed confidence in the calibre of persons appointed into the Judicial Commission of Enquiry by the state government.

“I trust the calibre and the character of the people there, they are independent,” he said.

The APC leader commended Governor Sanwo-Olu for his proactiveness in handling the demands of the #EndSARS protesters, recalling how he (Sanwo-Olu) visited President Muhammadu Buhari to lay the demonstrators’ requests.

“Within a few days, he (Sanwo-Olu) reported back to the public. That is responsive enough,” the APC chieftain stated.

He, however, condemned the recent looting and attack on police stations, among other forms of violence in the state.

According to Tinubu, such development can best be described as “a handshake beyond the elbow.”

Although there were insinuations that he had travelled out of the country in the wake of the chaos that enveloped the country’s commercial nerve centre, Tinubu was quick to dismiss them.

“I didn’t go nowhere; I’m a Lagosian and I still hold the title of Asiwaju of Lagos and I am still a Jagaban,” he said. “Fake news is all over the place.”

The shooting of #EndSARS protesters by soldiers on Tuesday in Lekki has continued to generate controversy across the country.

Although the military has denied responsibility in the incident, witnesses claim that many died during the shooting.

Amnesty International, on its part, put the casualty figure, together with killings recorded in the Ikeja area of Lagos at 12.

The #EndSARS protest was a demonstration against police brutality and extrajudicial killings in the country.

Following the protests, the Inspector General of Police, Mohammed Adamu, dissolved SARS – an arm of the police which was accused of human rights abuses.