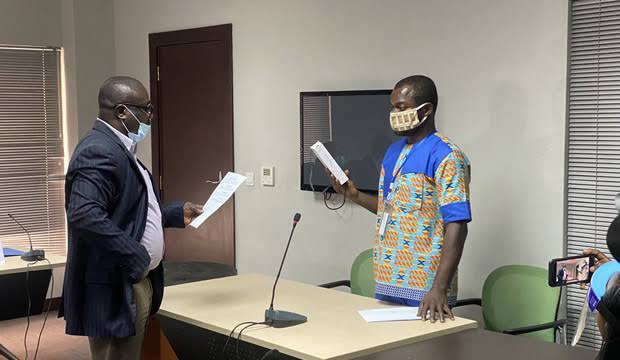 A middle-aged man, Okoli Aguwu, says he spent about one and a half months in the detention of the Special Anti-Robbery Squad (SARS).

He disclosed this on Tuesday at the opening session of the Judicial Panel of Inquiry and Restitution set up by the Lagos State government to look into the allegations of brutality and highhandedness by personnel of the unit of the Nigeria Police Force which has now been disbanded.

Aguwu, who was the first petitioner, told the panel that he was invited to a police station in the Ojo area of the state for some clarification over the disappearance of some goods at his former place of work.

Upon honouring the invitation, he said he was immediately arrested and was handed over to the Special Anti-Robbery Squad in Ikeja.

“I was like what is going on? And they said there was a complaint against me from my boss that something happened, and goods got missing.

“I said well, my boss has to come here so that we can iron out whatever issues because something like that has happened before and they called me to go back and resume (work), that it was a mistake on their system. After we waited for the whole day, nothing happened. The next day, they brought me back to Ojo from Ikeja, with so much threats.

“My boss did not even show up, then they started beating me, calling me a thief, fraudster and all that. They paraded me round the whole Alaba International Market, they asked me to stand straight in their vehicle, showing my face; they even took me to my church,” the petitioner said while narrating his ordeal in the hands of the security operatives.

He added that he was severely tortured and sustained several injuries in the process, showing some scars to those present at the hearing.

According to Aguwu, his boss visited the police station in some cases but rather than making efforts to bail him, he kept issuing death threats to him.

The victim said, “When my wife came with my mum, she told me that ‘everything don go o’ (meaning: everything has gone).

“They took over my house, they sold my car, they took over some properties, even my belongings inside my house, my generator, my inverter, phone; and they did not bring any of these things to the SARS (office) for me to see.”

He continued, “What they told me was to write a statement that I embezzled money in my office then as the manager and I said I would do no such thing.

“The torture continued but at the end of 47 days or thereabout, they said they would take me to a magistrate court with the wounds and everything; they even extracted two teeth from my mouth when they suspended me upside down.

“The last time I saw my boss then was when he came and he threatened that if I don’t give him back the goods that got missing or the money equivalent, that I am going to die there.”

Aguwu disclosed that hope of respite, however, began to surface following the intervention of a lawyer in the matter, courtesy of his mother and other relatives.

He stated that the legal practitioner filed a case of fundamental rights enforcement at the Federal High Court in Lagos in 2016, which he won.

“Hounourable Justice Ibrahim Buba, gave a ruling in my favour at N10 million as exemplary damages and till date, I have not heard anything, nothing whatsoever from them,” he said.

After about four years of disobedience to the court order, the petitioner urged the judicial panel to help him get justice in the case.