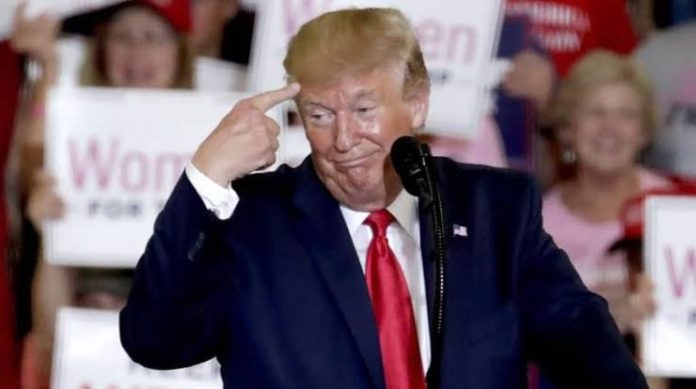 President Donald Trump has called for the postponement of the US Presidential election billed for November 2020. Giving his reason, the president said, “With universal mail-in voting (not absentee voting, which is good), 2020 will be the most inaccurate and fraudulent election in history.

“It will be a great embarrassment to the USA. Delay the election until people can properly, securely and safely vote??” He said this via his verified Twitter handle. Reactions are trickling in after Trump tweeted.The president has long opposed mail-in voting, which many states are embracing due to the Coronavirus pandemic.

House Speaker Nancy Pelosi replied to Trump with a tweet reminding the president that he lacked the constitutional powers to determine the dates of elections. Pelosi cited Article II, Section 1 of the US Constitution. It states: “The Congress may determine the time of choosing the electors, and the day on which they shall give their votes; which day shall be the same throughout the United States.

“Chairperson of the US Federal Election Commission, Ms Ellen Weintraub, also said the president lacked the power to move the election. According to the BBC, Weintraub said there was no need to delay the exercise, and called for more funding for states to run safe and secure elections.

Senate Majority Leader, Mitch McConnell, and the House of Representatives Minority Leader, Kevin McCarthy, both Republicans, also reportedly dismissed the idea. “Never in the history of the federal elections have we ever not held an election and we should go forward with our election,” the BBC quoted McCarthy as saying.

Another Republican senator, Lindsay Graham, who is an ally of Trump, also said postponing the election was not “a good idea”. However, a Republican lawmaker from Utah, Chris Stewart, said the president had “a legitimate point about mail-in voting being hard to monitor”. “Can you ensure the accuracy of mail-in voting? Now in some states, you can.

“In my state in Utah, for example, we’ve been doing it for quite a while, but we’re a small state with a relatively small population. “It’s harder to do on a national scale,” the BBC also quoted him as saying. Trump’s suggestion also reportedly came as a surprise to some officials in the White House, which referred questions about it to the president’s re-election campaign.

The campaign’s press secretary, Hogan Gidley, downplayed the president’s message, saying Trump only raised “a question about the chaos Democrats had created with their insistence on all mail-in voting”. “Universal mail-in voting invites chaos and severe delays in results,” Gidley stated.