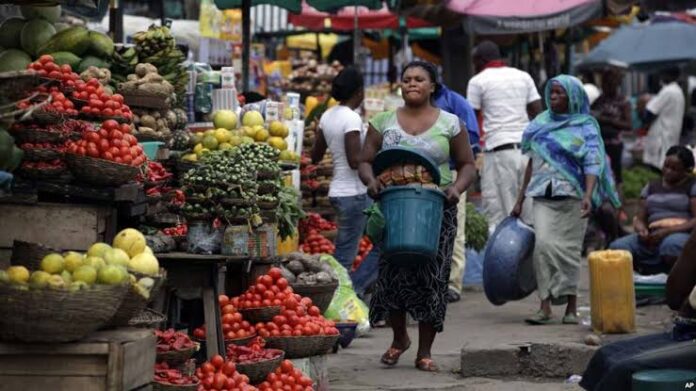 All-item inflation was the highest in Sokoto, Edo, and Akwa Ibom while Oyo, Taraba, and Jigawa river recorded the slowest rise.

Nigeria’s inflation rate has climbed to a 30-month high, as it rose further to 14.23 percent in October, the latest figures by the National Bureau of Statistics (NBS) has shown.

The report published on the website of the bureau shows that the new inflation rate is 0.52 percent points higher than the rate recorded in September 2020 (13.71 per cent).

Nigeria’s inflation has been on the rise since the country shut its land borders. The situation became worse with the emergence of the coronavirus which affected the global economy.

The economy is yet to recover from the coronavirus effects and the plunge in crude prices.

This rise in the food index was caused by increases in prices of bread and cereals, potatoes, yam, and other tubers, meat, fish, fruits, vegetables, alcoholic and food beverages, and oils and Fats.

“The ”All items less farm produce” or Core inflation, which excludes the prices of volatile agricultural produce stood at 11.14 percent in October 2020, up by 0.56 percent when compared with 10.58 percent recorded in September 2020,” it said.

Inflation in states
In October, all-item inflation was the highest in Sokoto, Edo, and Akwa Ibom while Oyo, Taraba, and Jigawa river recorded the slowest rise in headline Year on Year inflation.

For food inflation, Kwara, Edo, and Sokoto recorded the highest while Oyo, Jigawa, and Taraba recorded the slowest rise on a month on month inflation.

Inflation in Nigeria
Speaking on the latest figures today on Arise News, a business analyst, Chika Mbonu, said with the COVID-19 status in play, the inflation is to be expected.

“Food for example, one would have thought that the onset of harvest season will moderate the food inflation but you and me have read about things happening there now especially in Zamfara and Katsina states, where the farmers are being made to pay harvest levies before the Boko Haram people will allow them to go to their farms to harvest, so you can imagine that being put on top the cost of the harvest.

“Also, it is becoming difficult to move products from the north to the south because of supply chain challenges,” he said.

He said the border closure was a contributory factor, adding that the nation’s local production still falls short of our local demand.

Mr Mbonu also said in the basket of macroeconomic policies, one will find that the low interest regime at present is what will push growth.

“So that people can borrow and push growth and let inflation rise and hope that down the line the output will come and overtake the inflation and the inflation will moderate.

“So, you don’t expect the CBN, even at the MPC meeting, to do anything to moderate inflation. The era (is) to push growth and hope the output moderates inflation” he said.

“With consumer prices projected to jump to almost 14% in October, this will be the highest rate since February 2018. In a perfect world, the government may have deployed tight fiscal policy to tame inflationary pressures.

“However, such a move that involves raising taxes and limiting government spending may do more damage than good at a time where Nigeria continues to heal wounds inflicted by COVID-19. With inflation projected to rise amid ongoing border closures, the Central Bank of Nigeria may have limited room to loosen monetary policy.

“In absence of lower interest rates, the Central Bank of Nigeria may revisit the Loan-to-Deposit policy. Such a strategy was seen encouraging banks to lend and de-risking the real sector, particularly SME’s.

“Although consumer credit improved during the first few months of 2020, the coronavirus outbreak disrupted cash flow and income of individuals and businesses. This raised the risk of bad loans ultimately reducing lending by banks to consumers. However, last week’s announcement from Pfizer and BioNTech of encouraging results from their late-stage trial for COVID-19 created a sense of hope and light at the end of the tunnel. Market optimism over a vaccine bringing an end to this pandemic could boost sentiment and rekindle confidence.”

Moving forward
According to Mr Otunuga, “The most important question for Nigeria is whether it has the ability to recover back to pre-coronavirus levels. Economic growth is expected to remain negative during the third quarter of 2020 after contracting -6.10% in Q2. With Oil prices capped by demand-side factor, the International Monetary Fund’s 2020 growth forecast of -4.3 per cent could become a reality.