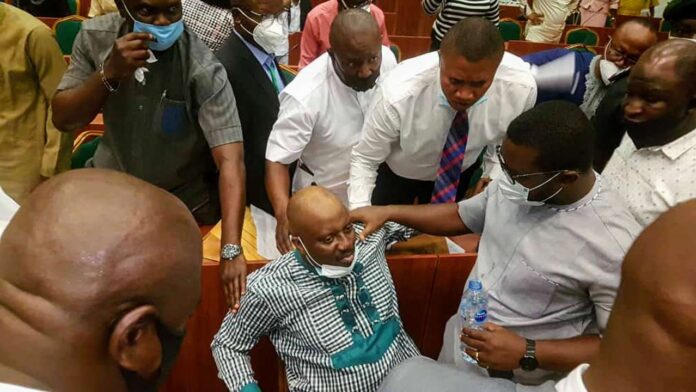 The Acting Managing Director of the Niger Delta Developing Commission, Kemebradikumo Pondei, has again come under fire for purchasing 10 cars and five buses for auditors investigating the financial accounts of the company.

The vehicles were given to all the firms auditing the accounts of the commission.

It was gathered that Pondei labelled the gifts as additional working tools to facilitate and support the work of the firms.

“The forensic audit was set up by President Muhammadu Buhari to look into the activities of NDDC from inception 20 years ago to August 2019.

“So, it is on that note that lead forensic consultants were appointed and 16 field forensic auditors procured to handle the process.

“So, we are here to hand over more tools to the auditors to assist them in the ongoing forensic audit of the commission.

“The audit will unravel a lot of things in the commission and it is not a witch-hunting process but just to know the state of things in NDDC,” Mr Pondei said.

The gifts have generated outrage with many positing that it will influence the outcome of the audit.

The Niger Delta Rights Advocates noted that while the audit was yet to begin after months of presidential order, it is appalled that NDDC MD will give cars to the auditing firms.

The group also said it was disturbing, adding that the auditing firms have been paid for their services.

The group said, “Our attention has been drawn to the handover of 16 operational vehicles to the lead forensic auditor appointed by the NDDC and 15 other sub-auditors.

“We deem this as disturbing given the fact that the forensic audit remains a defining moment in the history of the Niger Delta, and is capable of causing a positive turn around in the operational capability and delivery capacity of the interventionist agency.

“The NDRA is sad to note that more than 12 months after Mr President ordered the forensic audit of the NDDC, the whole process has become increasingly opaque, suspicious and doubtful.

“We are appalled that the NDDC would embark on purchasing operational vehicles for auditors who should be working independent of the apron strings of the management.

“This calls to question the sincerity of purpose and the integrity of the entire process. If vehicles could be purchased, it means that offices could also be hired for the auditors in the name of providing a conducive working environment.

“Since perception counts in the discharge of public service, we query the purpose for the purchase of these vehicles and consider it inappropriate and therefore, falls short of internationally acceptable benchmark for doing a thorough forensic audit of the operations of an Agency so blatantly blighted with the scourge of corruption.”

Recall that in July 2020, Pondei fainted during questioning by the House of Representatives Committee on Nigeria Delta Development Commission.

He fainted while he was being asked about the spending of the commission since he took over as Acting MD.