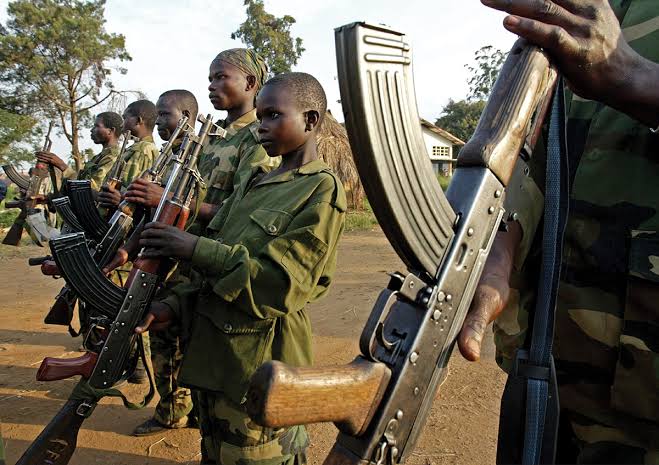 The Multinational Joint Task Force has said that Boko Haram terrorist group had introduced the use of child soldiers to resuscitate its declining influence in the Lake Chad Basin.

Chief of Military Public Information for MNJTF, Timothy Antigha, said this in a statement issued from N’Djamena, Chad on Thursday.

Antigha said the recruitment of child soldiers by the sect was part of their new strategy following the recent mass surrender of fighters to the military.

He said information on this disturbing development was brought in by intelligence sources and corroborated by concerned individuals and groups a few days ago.

He added that the Boko Haram terrorists further confirmed the development when they posted pictures of children dressed in military gear and holding assault rifles in a video released during the Sallah celebration.

The statement reads, “Earlier, Boko Haram have engaged in the mass abduction of school girls, sexual enslavement of women and mass murder of innocent civilians. This recent employment of child soldiers is as a result of frustration caused by several operational losses, leadership crisis, as well as disillusionment among fighters and their subsequent surrender in hundreds to the MNJTF.

“The focus on children is because they are easier to manipulate and indoctrinate than the adults within the region who can now see through the veil of deceit. Arising from this latest atrocity by Boko Haram, the MNJTF urges parents, local authorities, religious and traditional institutions to be vigilant and promptly alert security agencies of any overt or covert attempts to recruit their children and wards.”

Antigha advised youth to be mindful of promises of power and influence, economic prosperity and spiritual growth by the sect owing to the disillusionment and surrender that had depleted their ranks.

He added, “The stories of hardship and evil within the terrorist organisations as revealed by all surrendered Boko Haram fighters should be sufficient notice that Boko Haram and ISWAP have nothing good to offer anyone.

“It would be recalled that the United Nations Convention on the Rights of the Child on the involvement of children in armed conflict forbids the recruitment and use of children in Armed Conflicts.

“The Protocol states among others that; “Armed groups distinct from armed forces of a country should not, under any circumstances, recruit or use in hostilities anyone under 18.

“It is against this background that the MNJTF is drawing the attention of the United Nations, its relevant agencies and other stakeholders to the latest acts of inhumanity and desperation by Boko Haram, and urges severe condemnation and other necessary action.”