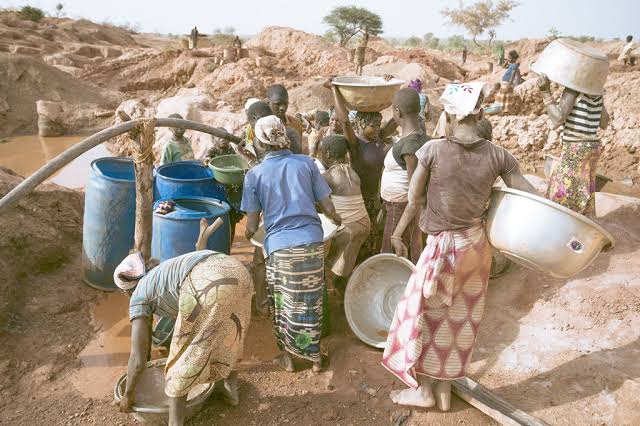 “Chinese are merely ripping us. We have to desist from flipping licences to them.”

A bolder and expanded role has been canvassed for Nigerian women miners on the day they all gathered to launch their headquarter office in Abuja, Wednesday.

President of Women in Mining In Nigeria [WIMN], Janet Adeyemi, speaking at the event asked for more assertive female voices, better coordination and impact-visioning in the industry, against the background of what she characterised as “tough headwinds.”

Ms Adeyemi, a veteran mining engineer, geologist and pioneer in the industry, also spoke of networking, mentoring, and capacity building as props women need to build into the making of what she called “total engagement,” adding that plans are currently afoot to hire experts to help deliver training and capacity development to members of the association.

Ms Akinyemi then focused on a major criticism of women miners regarding the claim that some acquire licences which they then resell to Chinese itinerant miners.

“Chinese are merely ripping us. We have to desist from flipping licences to them. If the problem is financing, we can form ourselves into cooperatives amongst ourselves” she said explaining that the new headquarters will serve as a resource centre “where everyone can come for to bridge their knowledge gaps.”

“I want to see the Nigeria chapter of women in mining catch up with other international chapters. I want to see you at the table. Don’t get tired when you fall because of falling down, you rise even stronger” Ms Adeyemi remarked.

Absent from the event on account of a clash with the Federal Executive Council meeting, the Minister of Mines and Steel Development, Olamilekan Adegbite, had, at the just concluded 5th Annual Nigeria Mining Week, emphasized the role of women in mining in the sector, stressing how “capable hands of women have contribute intellectually and practically to the discourse and the policy of the sector” and illustrating that the appointment of Oluwatoyin Akinlade, a woman, as the new Permanent Secretary of the ministry “is a sort of affirmative action to show that we do not only recognize women, we must get them involved in what we do.”

Oluwatoyin Akinlade, a medical doctor, emerged as the first woman to be appointed as the Permanent Secretary of the Ministry of Mines and Steel Development. She took over from her predecessor, Edet Akpan, who was posted to the Ministry of Science and Technology.

The Executive Secretary of the Solid Minerals Development Fund, Fatima Shinkafi, received kudos for “doing so much in ensuring that women are effectively mainstreamed into the system and that women who are not educated are well protected against the shocks of the sector.”

She, in turn, called for a knowledge-based approach to mining, urging women to “stop treating mining like a hobby, it’s not. It is knowledge/science,” insisting that women “must know the rudiments and ask those who know while doing everything around us to link our engagement to innovations and ideas.”

Ms Shinkafi spoke of how, in her agency, “we have registered 19 thousand artisanal miners, working on building capacity and how I have pitched 60 participation for women in the downstream sector, because it’s easier for women to work in the downstream than the mines.” Under the presidential initiative on the development of gold in the country called PAGMI, Ms Shinkafi said “we are building 50 buying centres across the country for gold. Gold is not the only thing, it’s just for a start.”

In his remarks, the Director, Artisanal and Small Scale Miners, in the ministry, Patrick Ojeka, gave accolades for the undeterred efforts of the women in the sector. He encouraged all women to “take part in this great work.” In a show of support for the women in the sector, the director said “issues concerning women will never be let down as long as I am still in office. I assure you, I will continue to support the growth of women in mining”

While speaking on the role of the media, Mrs Adeyemi expressed gratitude to Premium Times Centre for Investigative Journalism for its commitment and partnership with Women In Mining, which according to her would go a long way in reporting gender issues in the male-dominated sector.

Women In Mining In Nigeria
Women in Mining in Nigeria (WIMIN) is a non-profit organization established to protect the rights of all groups of women affected by mining operations.

WIMIN has a long list of networks within the mining industry and is also affiliated with the Miners Association of Nigeria for effective synergy. The group supports grassroots initiatives in the realm of personal and professional development while providing a national voice within the global minerals and mining community.

The organization is charged with the responsibility of advocating and promoting the participation of women in mining in Nigeria, encouraging and promoting a friendly and sustainable environment through the propagation of good host community engagement models where women are included, building a strong network among members and women in mining in Nigeria to encourage networking, mentorship, employment opportunities, funding and leadership amongst others.

Bitcoin Drops Under $30,000 For First Time In Five Months