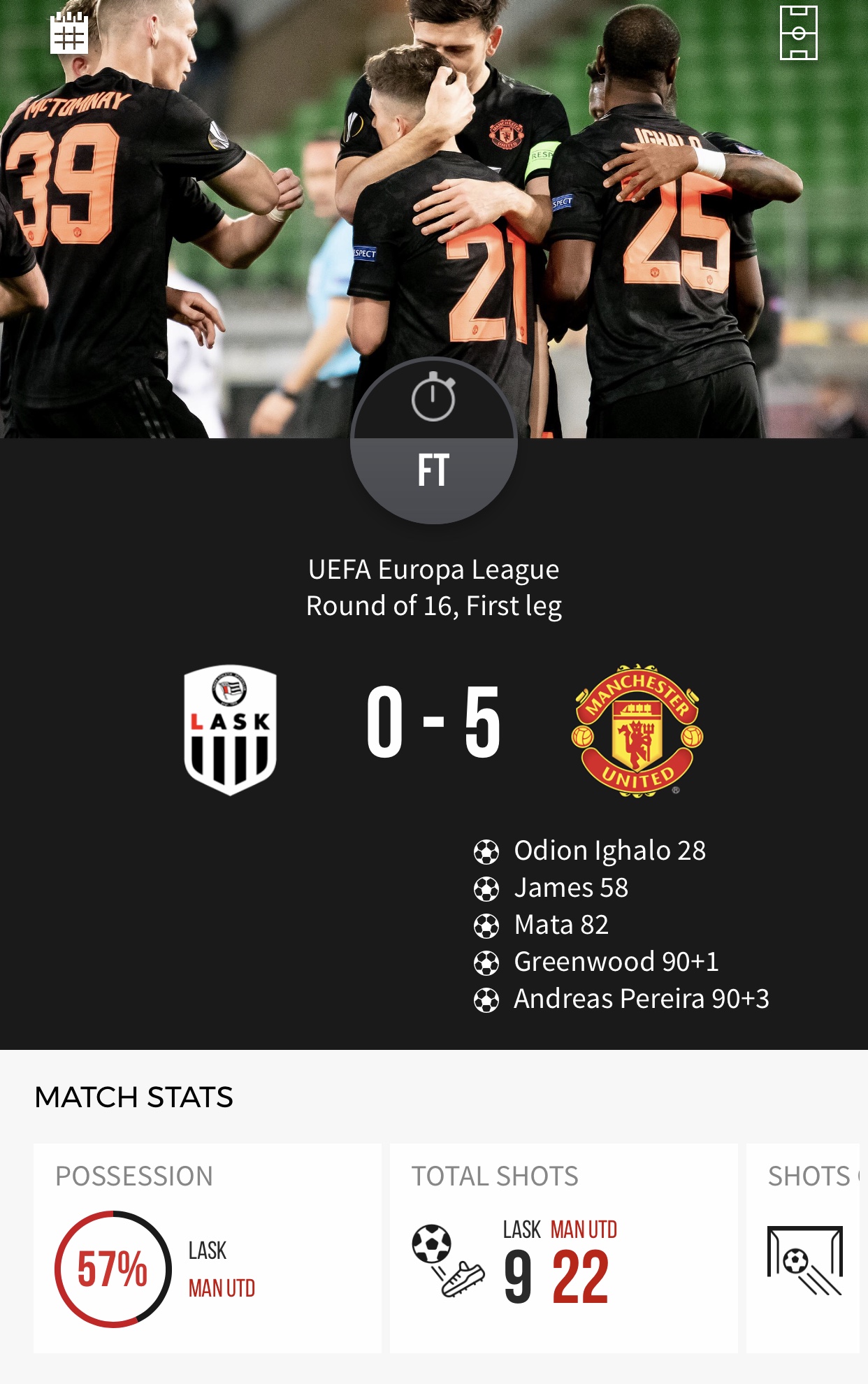 It was a memorable, but strange, evening with the game played behind closed doors due to coronavirus. The Reds began the game brightly and, after going close on a handful of occasions, the deadlock was broken by a sublime Odion Ighalo finish just before the half-hour mark. James added an excellent second after the break before Juan Mata and substitutes Mason Greenwood and Andreas Pereira struck further to surely all but clinch victory in the tie.

Solskjaer made five changes to the side that brilliantly overcame Manchester City in the derby last Sunday, with Sergio Romero, Eric Bailly, Scott McTominay, Mata and Ighalo all recalled to the starting line-up.

It was an eerie atmosphere during the opening quarter of the match and United were in control from the off. LASK stood firm initially but they were relieved to see Mata miscue a good chance when the ball dropped to him in the box on 18 minutes. Play continued with a lovely cross back into the area from Luke Shaw which Alexander Schlager punched clear but only into Mata’s path, however his shot was deflected just wide.

Schlager was called into action again two minutes later when Ighalo turned well on the edge of the box, but his low drive was gathered by the LASK keeper.

James was next to go close after being found well by Mata, as a brilliant first touch gave him the opening to curl a lovely effort towards goal, but Schlager made an excellent stop. From the resulting corner, Bailly headed just wide as United continued to pile on the pressure.

That pressure told on 28 minutes and how. A lovely run forward from the impressive Bruno Fernandes led to him finding Ighalo on the edge of the area and, after three brilliant touches with both feet to control the ball and make space, the Nigerian fired a superb half-volley goalwards which smashed in off the crossbar.

LASK had offered little going forward up to that point but almost got sight of a possible equaliser when a cross from the right deflected to Dominik Frieser. He took aim from close range, but Bailly dived in to make a superb block in front of Romero.

Harry Maguire had a chance to double the advantage as half-time approached but he headed Fernandes’s corner inches wide.

LASK enjoyed a little spell of possession at the start of the second period but it wasn’t long before Solskjaer’s men took further control of the tie. After Mata had blazed an effort over and McTominay had seen a low drive saved by Schlager, James, played in by Ighalo, cut inside to fire home for the Reds on 58 minutes thanks to a lovely run and shot. It was his first United goal since August and it was clear what it meant to him.

Four minutes later, Ighalo was hugely unlucky not to grab United’s third of the night. The continually impressive Fernandes flicked the ball intelligenly to Ighalo, who showed great strength to hold off a couple of defenders before rolling his effort against the outside of the post.

LASK continued to put up a fight but struggled to create much apart from a good opening on 70 minutes for Peter Michorl but the Austrian midfielder could only fire over after doing well to create the opening by shimmying past Bailly.

United ensured it was a memorable end to the game when Mata and substitutes Greenwood and Pereira all added their names to the scoresheet. After picking the ball up on the touchline, Mata found Fred in midfield who then slid a sublime defence-cutting pass back to the Spaniard, and he finished with aplomb.

Chong then put Greenwood through down the left and the teenager unleashed a superb shot which bounced in off both posts for his fifth strike in the competition. There was still time for more as Pereira added the icing on the cake, when he took aim from 25 yards and Schlager let the ball slip through his grasp.

The Reds now head back to Old Trafford five goals to good, ahead of the weekend clash with Tottenham.