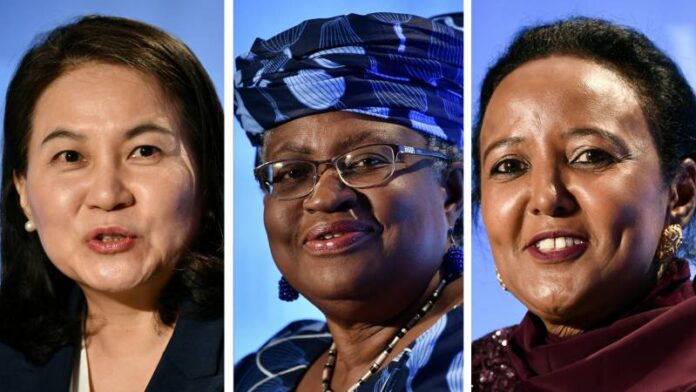 Three women — two Africans and a South Korean — have been selected among the five candidates still in the running to take the helm of the World Trade Organization, diplomatic sources told AFP Friday.

No woman, and no African, has ever headed the global trade body.

The initial pool of eight candidates to replace Roberto Azevedo, who stepped down as WTO chief last month a year ahead of schedule, was whittled down to five Friday.

The narrowing of the field came after the WTO in recent days hosted consultations, dubbed “confessionals”, with all 164 member states to determine which of the initial eight were the most likely to garner the needed consensus.

The three with the least support, Jesus Saede Kuri of Mexico, Tudor Ulianovschi of Moldova and Abdel-Hamid Mamdouh of Egypt, were then cut from the list

There is no requirement for a regional rotation of the WTO chief position.

But there have been calls for an African to finally get a shot at running the organisation, which since its creation in 1995 has counted three director-generals from Europe, and one each from Oceania, Asia and South America.

The WTO has presented a timeline for selecting a winner within a few months, but some fear increasing politicisation of the organisation, which relies on consensus to reach decisions, could draw out the process much longer.

It is already mired in stalled trade talks and struggling to curb trade tensions between the United States and China.

The global trade body has also faced relentless attacks from Washington, which has crippled the WTO dispute settlement appeal system and threatened to leave the organisation altogether.

And now the WTO, set to remain leaderless for several more months at least, is struggling to help members navigate a severe global economic slump triggered by the coronavirus pandemic.