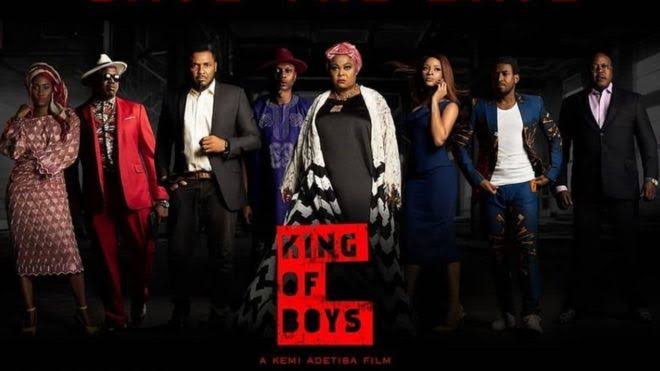 Kemi Adetiba has announced that her much-anticipated movie sequel, “King Of Boys 2” will be a Netflix original.

The first installment of King Of Boys got several nods with fans singing praises of Sola Sobowale’s performance in the motion picture. Even though the first was seen in the cinema before it could be streamed on Netflix, the second will go straight to the streaming giant.

Adetiba shared the detail on social media through an Instagram post. The award-winning filmmaker wrote: “We’re editing KOB 2 and trying to organize all assets in proper order etc, and it hit me… So that big, flashing, neon-red @netflix “N” is gonna come first… Then my production company’s logo (see above ☺️) and then a “NETFLIX presents…” right after.

MY film is gonna be a Netflix Original!! I don’t know about y’all but ain’t no posing in my book. I might be EXTREMELY scared, nervous, my anxiety is definitely through the roof, but believe me when I say, that I’m also SUPER STOKED about it.

Not bad for this Ekiti/Akwa-Ibom girl who many prolly thought wouldn’t amount to anything. Heck… Even “I” had very serious (and valid) doubts about myself at a time. But life is a journey. And as long as you have breath, you work hard, work smart, play fair (always), you got that killer drive, and are dogged about achieving your goals by any LEGAL (cos some of you…😒) means necessary… There’s always a chance you can drastically change your life story in a positively explosive way. I gotta tell y’all mine one day!!!

And I’m HERE!!! It’s not the end goal of course. Not by a long shot. But it’s a super amazing milestone that I’m both proud of, and grateful for.

But I don’t wanna be here alone… Let’s GOOOOOO!!! p.s. Don’t be scared of your dreams. I dream like a naive 16-year-old who life hasn’t shown yet 🤣

Like @jcolewrld said, “They say anything is possible. You gotta dream like you’ve never seen obstacles!”
I dream of the mighty things I want to do and achieve. And I don’t think a single one of them is stupid, unreasonable or far-fetched.

Your dreams are just God’s way of showing you the blue print of what you are capable of.
Have a happy, goal-achieving “hump day” today ❤️☺️😘 #NetflixShouldersLoading #HiDad 😜

The first installment of King Of Boys enjoyed enormous Box Office success and was a fan favourite which makes movie lovers in the Nollywood movie space expectant of what is to come in the sequel. The cast and crew wrapped shooting in November and the motion picture is now in the post-production stage.