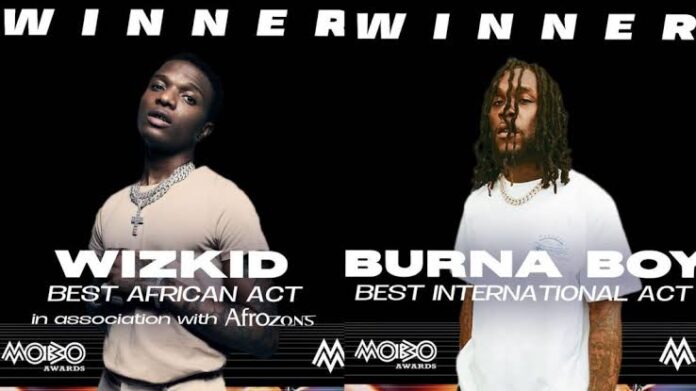 Singer Wizkid has emerged winner for the Best African Act at the recently concluded Music of Black Origin (MOBO) Awards.

The MOBO Awards made a huge comeback , returning for the first time since 2017 to celebrate the music with a virtual ceremony, hosted by Maya Jama and Chunkz, live-streamed on YouTube.

Wizkid who won of the Best African Act category which had a galaxy of stars competing for the award like Davido, Burna Boy, Tiwa Savage, Stonebwoy, Shatta Wale, et cetera.

Burna Boy also snagged an award for the Best International Act at the award show – Recall in 2017, the “Odogwu” singer became the first African Artist to have won both the BET Award and MOBO Award for Best African Act. He was nominated in the category alongside Rema, Drake, Megan Thee Stallion, the late Pop Smoke, Lil Baby, and more.

Congratulations to @burnaboy! He is our 2020 Best International Act #MOBOAwards winner 🏆 🇳🇬🙌🏾🎉✨ pic.twitter.com/1bCZPvY2xS

Rapper, Headie One was named best male act, trumping Stormzy, J Hus, Nines, and more – he also featured on the Mobo song of the year, Don’t Rush by pop-rap duo Young T & Bugsey, which was voted for by the public. Another public vote winner was rapper Aitch, who picked up the best newcomer.

Steve McQueen, the director was given the inspiration award. “This is an extraordinary prize,” he said. “Thank you so much… When people didn’t want to recognise us, we recognised ourselves and that’s given me the inspiration to go forward.”

R&B singer HER, nominated for three Grammys including song of the year, performed her song Damage, while two of Nigeria’s very own Tiwa Savage and Davido made an appearance.

Davido, who in 2017 took the Best African Act award, brought some cool vibes with his performances of ‘The Best’ and ‘FEM’ from his latest album A Better Time together with Mayorkun. Tiwa Savage brought her signature energy to the stage performing a medley of including ‘Koroba’ and ‘Dangerous Love’.