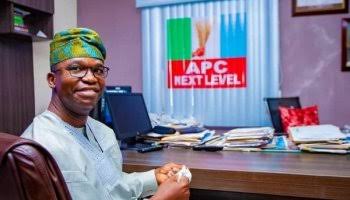 The final result of the election was announced at the INEC collation centre Sunday morning.

The All Progressives Congress (APC) has secured an overwhelming victory in Saturday’s senatorial bye-election in Lagos East district.

The final result of the election was announced Sunday morning at the INEC collation centre by Ademola Oremosun, the INEC Returning Officer and professor at the University of Lagos.

The APC and its candidate, ex-banker Tokubo Abiru, polled 89,204 votes to win the election. His closest challenger was the Babatunde Gbadamosi of the Peoples Democratic Party (PDP) who scored 11,257 votes.

The media reported how the bye-election was conducted on Saturday in the five local governments in the district: Epe, Ibeju-Lekki, Kosofe, Somolu and Ikorodu. The election witnessed low voter turnout and late arrival of election materials in most of the 71 wards, 1,928 polling units and 188 voting points in the district.

The APC was declared the winner in each of the five local governments in the area.

Below is the final election result: