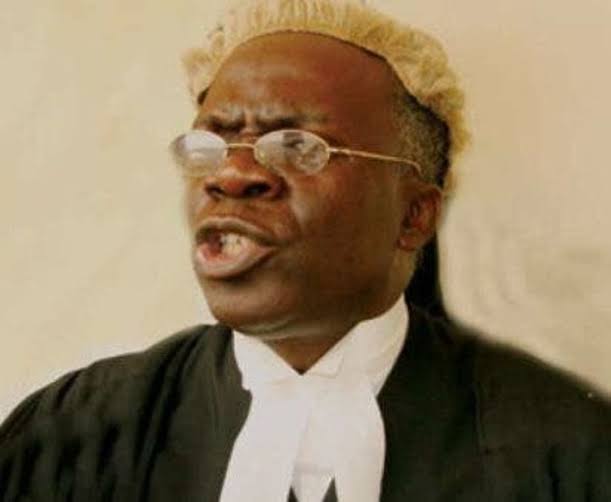 Human Rights Activist and Senior Advocate of Nigeria, Femi Falana has appealed to judges and chief magistrates to conduct a monthly inspection of all police stations and detention centres across the country.

Falana who disclosed this in a letter which was dated November 12, 2020, said visiting Judges and Chief Magistrates are empowered to order the release of detainees, or grant them bail or direct that they be arraigned in court.

He notes that if all detention facilities in the country are regularly inspected by Judges and Chief Magistrates as stipulated by the law Nigerian citizens “will no longer be subjected to illegal arrest and detention by the Police and other security agencies.”

Read the full statement below…

In spite of the Directive of the National Judicial Council the provision of the law was not complied with by many Judicial Authorities. Hence, the incessant arrest, detention and torture of poor citizens by the Police and other security agencies have since become the order of the day.

However, the newly enacted Nigeria Police Act, 2020 has imposed a duty on all Chief Magistrates and Judges to conduct monthly visitation and inspection of all police stations and other detention facilities within their territorial jurisdiction other than Correctional Centres. Specifically, section 70 of the Act provides as follows:

“70 (1) The Chief Magistrate, or where there is no chief magistrate within the police division, any magistrate designated by the Chief Judge for that purpose, shall at least every month, conduct an inspection of police stations or other places of detention within his territorial jurisdiction other than the prison.

(2) During a visit, the magistrate may;

(a) call for, and inspect, the record of arrests;

(b) direct the arraignment of suspect;

(c) where bail has been refused, grant bail to any suspect, where appropriate, if the offence for which the suspect is held is within the jurisdiction of the magistrate.

(3) An officer in charge of a police station or an official in charge of any agency authorized to make an arrest shall make available to the visiting chief magistrate or designated magistrate exercising his powers under subsection (1):

(a) the full record of arrest and record of bail;

(b) applications and decisions on bail made within the period; and

(c) any other facility the magistrate requires to exercise his power under that subsection.

(4) With respect to other Federal Government agencies authorized to make arrests, the High Court have jurisdiction shall visit such detention facilities for the purpose provided in this section.

(5) Where there is the default by an officer in charge of a police station or an official in charge of an agency authorized to make an arrest to comply with the provisions of subsection (3), the default shall be treated as misconduct and shall be dealt with in accordance with the relevant police regulations under this Act, or under any other disciplinary procedure prescribed by any provision regulating the conduct of the officer or official of the agency.”

From the foregoing, it is crystal clear that the visiting Judges and Chief Magistrates are empowered to order the release of detainees, or grant them bail or direct that they be arraigned in court.

No doubt, the provision of section 34 of the Administration of Criminal Justice Act, 2015 and Nigeria Police Act, 2020 have confirmed the intention of both the Legislative and Executive arms of the Federal Government to ensure that the fundamental right of every citizen to personal liberty is not infringed upon or abridged by law enforcement officers contrary to the procedure permitted by law. It is now left for the Judiciary to activate and implement the provisions of the law in order to end the incessant arrest and prolonged detention of the Nigerian people without any further delay.

We are of the strong view that if all detention facilities in the country are henceforth regularly inspected by Judges and Chief Magistrates as stipulated by the law the people of Nigeria will no longer be subjected to illegal arrest and detention by the Police and other security agencies.

In particular, there will be no basis for #endsars and any similar campaign either now or in future. We are therefore compelled to call on Judges and Chief Magistrates to carry out their duties under section 70 of the Police Act.

However, to achieve the objective of the law we appeal to the respective Chief Judges to supervise the Visiting Judges and Chief Magistrates in the discharge of their statutory duties. Where there is no Chief Magistrate within the police division, the Chief Judge should designate a Magistrate for the purpose in accordance with section 70 (1) of the Nigeria Police Act, 2020.

We equally call on the members of the Human Rights Community including the Nigerian Bar Association to assign their accredited representatives to accompany the Judges and Chief Magistrates during the monthly inspection of police stations and other detention facilities in Nigeria.

Alliance on Surviving Covid-19 and Beyond