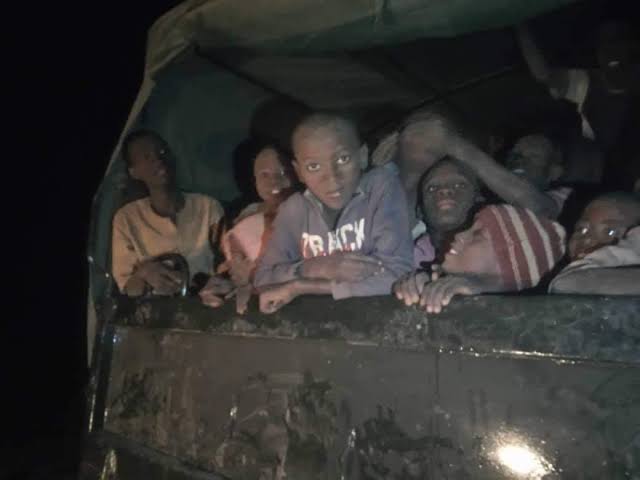 Hundreds of students abducted from a school in Kankara Local Government Area (LGA) of Katsina State have been released, authorities in the state have said.

The Katsina State Governor, Aminu Masari, confirmed the release of the students on Thursday, a week after they were kidnapped by gunmen.

According to him, the boys are presently kept safe in Tsafe, a local government area in Zamfara State.

Governor Masari noted that the boys would be brought back to Kankara in Katsina State on Friday.

Mr Suleiman Tsiga, who is the Information Officer of Ƙanƙara LGA, also confirmed the release of the students to Channels Television.

He disclosed that the state governor, Aminu Masari, had directed that the children be moved to Ƙankara LGA secretariat before he changed his decision for security reasons.

The Armed Forces Know Their Job
Although the government did not give a specific figure of students released by their captors, over 300 of them were unaccounted for before the news of their freedom broke.

Shortly after their release was reported, President Muhammadu Buhari described the safe return of the schoolboys as a big relief to their families, the entire country and to the international community.

He commended what he called the spirit of partnership and the collaborative efforts of the governments of Katsina, Zamfara and military which led to the release of the students.

“The Governor (Masari) and the army worked extremely hard. As soon as I got the information, I congratulated them.

“The Armed Forces know their job. They have been well trained and properly motivated,” President Buhari was quoted as saying in a statement by his media aide, Garba Shehu.

Katsina State is located in the north-west region of the country, but the Boko Haram terrorist group which has been operating in the North East for more than a decade claimed responsibility for the abduction.

While some of the students abducted escaped during the incident, some others returned recently as the grieving parents keep watch at the school in anticipation of their children’s release.

Few Hours Turn Four Days
The abduction of the students sparked an outrage with calls from various individuals and groups on the government to step up efforts towards securing the lives of the people.

It occurred at a time when President Muhammadu Buhari had travelled to Daura, his hometown in Katsina for a private visit.

The President had condemned the incident in a statement shortly after it happened and sent a delegation of the Federal Government comprising the Minister of Defence, Major General Bashir Magashi, and the service chiefs to Katsina to work with the state government in securing the release of the schoolboys.

In spite of his action, President Buhari was under fire for not visiting Kankara to sympathise with the parents of the students.

Receiving the delegation at the Government House on Sunday, Governor Masari confirmed that at least 333 students were still unaccounted for.

Magashi, on his part, had assured the governor that the security agencies had swung into action and promised that the boys would be rescued “in some few hours”.

It, however, took four days since the minister made the remarks before the students were released.

Their parents can now heave a sigh of relief when their children return to them, but it is unclear if their captors released all the students.

Read the full statement of the President’s reaction to the release of the boys below:
PRESIDENT BUHARI WELCOMES THE RELEASE OF KIDNAPPED KANKARA STUDENTS

PRESIDENT Muhammadu Buhari has welcomed the release of kidnapped students of the Government Science Secondary School, Kankara, describing their safe return as a big relief to their families, the entire country and to the international community.

In a short remark shortly after their release was announced, President Buhari expressed the nation’s appreciation for the steps taken by all involved to make their release possible.

President Buhari specifically cited what he called the “spirit of partnership and the collaborative efforts of the government of Katsina, Zamfara and military leading to the release and commended the nation’s intelligence agencies, the military and police force for providing the environment for the safe release of the hostages.”

“The Governor (Masari) and the army worked extremely hard. As soon as I got the information I congratulated them. The Armed Forces know their job. They have been well trained and properly motivated.”

On the issue of detainees held elsewhere in the country by either terrorists or bandits, the President gave assurances that his administration is acutely aware of its responsibility to protect the life and property of the Nigerians.

“When we came, we made efforts that yielded the return of the Chibok Girls. When a similar incident of school abduction happened at Dapchi, we successfully returned all but one of the more than one hundred abductees. When this latest incident happened, we put in our efforts and today we have this result to show.”

“We have a lot of work to do, especially now that we have reopened the borders. It is unfortunate that the bandits and terrorists continued to get weapons even under the circumstances of the border closure. We are going to dare them. We will deal with all that,” the President further assured.

He prayed for the full recovery of the students who he said had endured significant hardships in the course of their six-day ordeal.

He also gave further assurances of the determination of his administration to return to safety all fellow citizens held against their will.

Two Children ‘Abducted’ From Lagos By Nanny Rescued In Benin-City