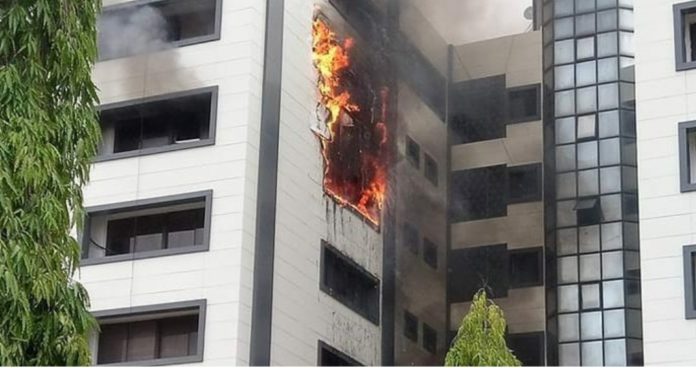 The fire that gutted a flank of the Treasury House, office of the Accountant-General of the Federation, was caused by an electric spark at about 10 a.m. on Wednesday, the Minister of State for Budget and National Planning, Clem Agba, says.

Mr Agba spoke with journalists after the fire was put out. He said the fire started in an office on the third floor of the building.

He further explained that the fire occurred “after an officer came to the office. He said he put on the air conditioner and there was a spark and immediately he put it off.”

Earlier, the Federal Fire Service announced in a tweet that its team had put out the fire, with combined efforts from sister-agencies.

This was buttressed by Mr Agba who said the fire service initially had difficulty getting into the building, but after about 35 minutes the fire was contained.

“They got inside and fought the fire. Five fire trucks were used within 35 minutes,” he said.

Already, there are subtle innuendos on social media that the fire was staged to excuse the government of accounting for funds meant to fight COVID-19 in the country.

But Mr Agba brushed this aside, saying that not only is its data intact, its operations are largely digital.

“We have gone round the offices that were affected, our data centre where all our records are fully intact. There is no disruption. For a while now we have gone digital,” the minister added, a mask strapped around his mouth, himself and his audience violating the physical distancing directive.

“Even if the data centre were to be affected, we have a backup centre that is outside Abuja, in the event we experience loss of any data.

“The only thing that happened to the data centre is the cooling unit which is in the exterior at the back. The cooling unit will be put in order,” he noted, saying that the unit has been closed temporarily.

Meanwhile the FCT police commissioner, Bala Ciroma, who also briefed journalists at the scene of the incident, said an investigation into the cause of the fire had commenced.

The minister alluded to this, too. He said while “a few documents were burnt,” the extent of the damages is yet to be ascertained.”