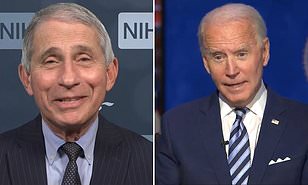 US President-elect Joe Biden on Thursday said he had asked the government’s top infectious disease specialist Anthony Fauci to remain in his post and join his COVID-19 team after he takes office.

“I asked him to stay on in the exact same role he’s had for the past several presidents,” Biden said in an interview with CNN, referring to the expert who outgoing President Donald Trump had suggested he would fire after the election.

“And I asked him to be chief medical adviser for me as well and to be part of the COVID team.”

On Friday, Fauci told NBC’s “Today” he accepted the position.

“Oh, absolutely. I said yes right on the spot,” Fauci said when asked if he’d taken the role.

Biden also said that on his first day in office he would ask Americans to wear masks for 100 days to help reduce transmission of the virus that is again surging in a country with the world’s highest number of deaths and infections.

Biden’s approach to the virus stands in sharp contrast to that of Trump, who has downplayed its seriousness, mocked mask-wearing and called for reopenings despite having been hospitalized with Covid-19 himself.

The president-elect said he planned to use government authority where possible to issue a “standing order” for masking in federal buildings as well as for interstate transportation, including on airplanes and buses.

To build trust in vaccines after they are approved, Biden said he was willing to be vaccinated in public.

The United States has surpassed 14 million Covid-19 infections, with more than 275,000 deaths.