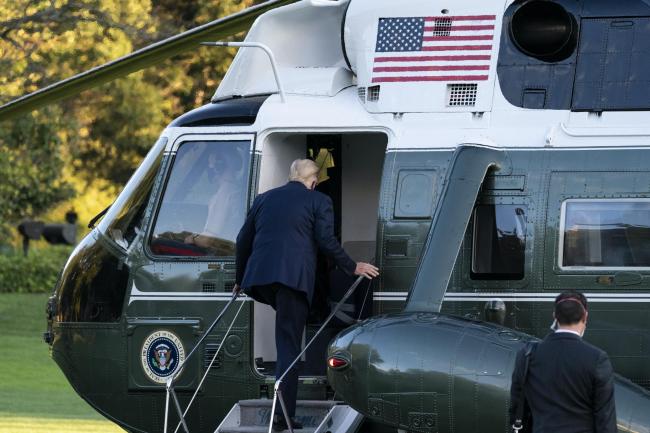 Donald Trump is doing “very well” in his hospital treatment for Covid-19, his medics said Saturday, but a source with knowledge of the US president’s condition said his vital signs had been worrying, with the next 48 hours critical.

Trump is up and walking, has been fever free for 24 hours and his cough, nasal congestion and fatigue are improving, physician Sean Conley said during the first medical update on his status since the president was admitted to Walter Reed military medical center Friday.

Trump is not receiving extra oxygen, he added, and is “doing very well.”

“We have monitored his cardiac function, his kidney function, liver function. All of those are normal,” another member of the medical team, Sean Dooley said.

But a source familiar with the president’s health gave a much more worrying assessment.

“The president’s vitals over the last 24 hours were very concerning and the next 48 hours will be critical in terms of his care,” the source said. “We’re still not on a clear path to a full recovery.”

The White House has not commented on the assessment.

Conley was evasive when asked whether Trump had received supplementary oxygen at any point since falling ill, only confirming that he hadn’t received any at the hospital or on Thursday — the day he had his test.

This leaves the possibility that he was on oxygen at the White House on Friday before being admitted to Walter Reed, and there were reports in US media, unconfirmed by AFP, that this was the case.

Soon after Trump arrived at hospital, Conley said in a memo that the president was starting a course of therapeutic drug remdesivir and had received an eight-gram dose of an experimental polyclonal antibody cocktail.

Conley would not put a “hard date” on Trump’s discharge from hospital or disclose the president’s temperature.

Amid the rosy assessment from the White House, more people close to the president disclosed they have tested positive for the coronavirus.

The latest is campaign advisor Chris Christie, who was among several aides that helped Trump prepare for the first presidential debate that have since announced positive tests.

Three senators as well as Trump’s campaign manager and other senior aides are among a growing list from the president’s orbit to have contracted the virus, with at least seven confirmed cases tied to an event in the White House Rose Garden last weekend.

With Trump, who is trailing in the polls, knocked off the campaign trail for treatment Walter Reed army medical center outside Washington — and possibly for many days after — his campaign plans were in disarray ahead of a potentially messy election on November 3.

Among the unknowns were the prospects for two remaining presidential debates and whether the president will have to yield power temporarily to Vice President Mike Pence if his condition worsens.

“Going well, I think! Thank you to all. Love!!!” Trump said in his first tweet from the hospital late Friday.

He had walked out of the White House under his own steam — and wearing a mask, which is rare for the world’s most prominent pandemic skeptic — to be taken to the hospital.

The president — a prolific tweeter — stayed off social media almost all day Friday.

Heightening the sense of crisis at the heart of power in America, a third Republican senator, Ron Johnson of Wisconsin, announced on Saturday that he had tested positive.

The latter two sit on the chamber’s Judiciary Committee, which is slated to hold hearings for Amy Coney Barrett, Trump’s conservative nominee to fill a vacant seat on the Supreme Court.

Public health experts have expressed alarm at the number of cases that appear linked to a celebration of Barrett’s nomination at the Rose Garden on September 26.

These are uncharted waters for the US election with Trump — who is well behind his Democratic opponent Joe Biden in the polls — having to freeze much of his campaign.

Biden now finds himself alone on the campaign trail — and able to argue that his more cautious approach to Covid-19 has been vindicated.

Biden has made Trump’s frequent downplaying of the pandemic and mixed messaging on mask-wearing a central campaign theme, while Trump has tried to shift the narrative to areas where he feels stronger, like the economy.

The former vice president, who stood on a stage with Trump for 90 minutes during their ill-tempered first debate Tuesday, announced that he and his wife Jill tested negative Friday.

Underlining his sudden advantage in the bitter race, Biden, 77, traveled to Grand Rapids, Michigan on Friday, going ahead with a previously scheduled campaign stop.

However, Biden also reminded voters that he has pushed consistently for a serious approach to the coronavirus, which has killed more than 208,000 Americans, unlike his opponent who has mocked the Democrat for his rigorous use of masks.