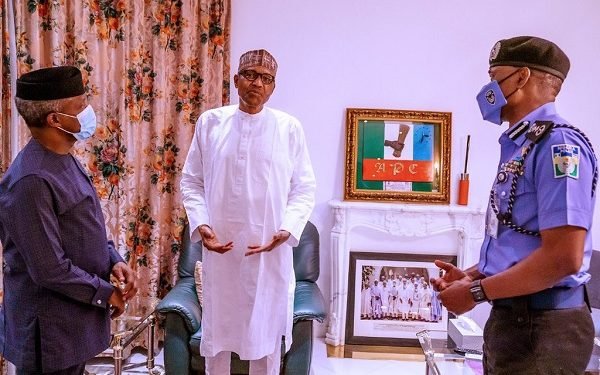 President Muhammadu Buhari says he has instructed the inspector general of police, Mohammed Adamu, to “conclusively address the concerns of Nigerians” about police brutality, in his first public comments days into expanding nationwide protests demanding the scrapping of the police Special Anti-robbery Squad, SARS.

“I met again with the IGP tonight. Our determination to reform the police should never be in doubt. I am being briefed regularly on the reform efforts ongoing to end police brutality and unethical conduct, and ensure that the Police are fully accountable to the people,” the president tweeted late Friday night.

“The IG already has my firm instructions to conclusively address the concerns of Nigerians regarding these excesses, & ensure erring personnel are brought to justice. I appeal for patience & calm, even as Nigerians freely exercise their right to peacefully make their views known.”

Protests have taken place in several Nigerian cities, with placard-carrying demonstrators marching through the streets and demanding that SARS, a police unit accused of extensive abuse and extortion, be abolished.

On Thursday, protesters in Lagos spent a night outside of a government building. The Lagos House of Assembly later on Friday passed a motion backing calls for SARS to be scrapped. The lawmakers also urged police to ensure the safety of protesters and not harrass them.

Earlier, police had announced it will implement reforms but insisted the controversial unit will stay, a concession rejected by protesters.

Protests are being planned outside of Nigerian embassies in some countries.

Mr. Buhari said in his tweet that “The vast majority of men and women of the Nigeria Police Force are patriotic and committed to protecting the lives and livelihoods of Nigerians, and we will continue to support them to do their job.”