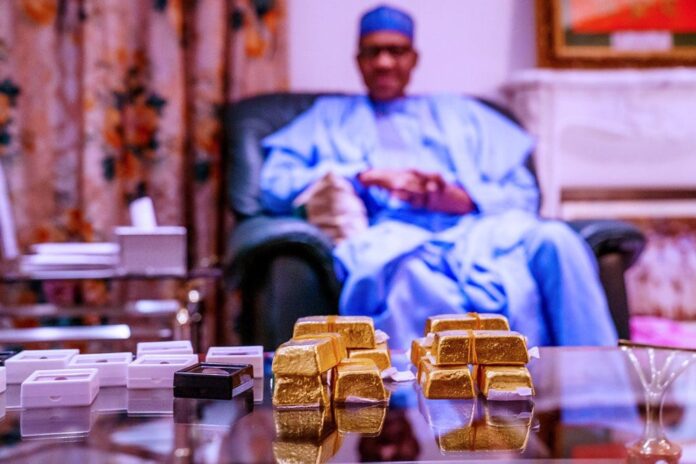 The gold is expected to become a part of Nigeria’s external reserve after being purchased by the CBN.

The Governor of Zamfara State, Dr. Bello Matawalle, was at the State House in Abuja to present gold bars mined in the state to President Muhammadu Buhari.

A media aide to the President Buhari, Bashir Ahmad, announced this in a social media statement on Tuesday.

PICS: President @MBuhari last night at his residence, the State House, Abuja, received Governor of Zamfara State, Dr. @BelloMatawalle1 accompanied by Alh. Bashir Hadejia. Gov. Matawalle was at the State House to present some gold bars and other precious stones mined in his State. pic.twitter.com/tvwD6VOJKI

This comes as the Presidential Artisanal Gold Mining Development Initiative (PAGMI) is set to boost artisanal gold mining in the state.

Nairametrics reported that Nigeria had earlier mined, processed, and refined gold under the Presidential Artisanal Gold Mining Development Initiative, PAGMI. The first batch of PAGMI gold was unveiled at a presentation ceremony to President Buhari on July 16, 2020.

The Honourable Minister of Mines and Steel Development, Olamilekan Adegbite, said the gold produced is expected to become a part of Nigeria’s external reserve after being purchased by the Central Bank.

“PAGMI will result in the creation of thousands of new mining and formalized jobs, leading to poverty alleviation for many households. Under the scheme, artisanal and small scale gold miners will earn more from higher productivity, better recovery rates through mechanization of operations, and better access to reliable geological information,” he said.

The Minister also told reporters in July that the government is working with a Canadian company to begin the export of Gold in Nigeria’s proven one million ounces of gold by next year, adding that data would have to be collected on the minerals Nigeria has in large quantities through an Aero Magnetic Survey, which is done through a plane flying low to observe mineral data.

The minister says Nigeria’s proven gold reserves could rise to over 200 million ounces and Nigeria plans to begin processing of local minerals next year.