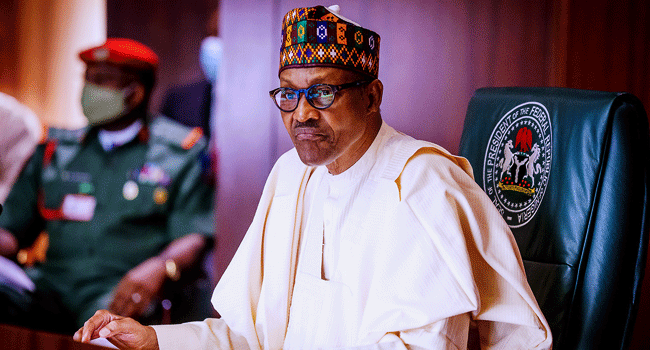 President Muhammadu Buhari on Monday met with Governors from the six North-East states.

According to a Channels Television Correspondent, all service chiefs and the Inspector-General of Police were in attendance.

The meeting held after the Governors, on Saturday, elected Borno State Governor, Babagana Zulum, as Chairman of the region’s Governors Forum.

In the communique released after its Saturday meeting, the North-East Governors commended the Federal Government for its efforts in keeping the region safe.

However, it asked the military to “intensify efforts to secure hard-to-reach areas in the region and ensure safe access to farm-lands.”

The Governors requested the deployment of state-of-the-art military hardware to the region and increased arming of police officers to make up for “manpower deficit in the Nigerian Armed Forces.”

The police, they said, should be allowed to “carry state-of-the-art weapons where necessary and be provided with strategic equipment like high-velocity tear gas, trackers and Armoured Personnel Carriers (APC).”

In an appearance on Channels Television’s breakfast show, Sunrise Daily, criminologist Professor Etannibi Alemikha on Monday faulted the Governor’s calls for increased arming of the region.

“From the military or security point of view, what is required is actually not weapons, it is intelligence,” he said.

“I would have expected that they will ask indeed that there is the need for the deployment or greater capacity of intelligence-gathering through the various media.

“You could have the highest weapons; you will still be taken unawares. I think what is largely missing in the North-East situation has been intelligence.”

The professor also disagreed with the idea of handing sophisticated weapons to the police.

“An average policeman encountered on the street should not be carrying AK-47,” he said. “It is not a question of trust, but one of philosophy. The philosophy behind the police is that they are part of the people and therefore they should not use force that is extraordinary.”