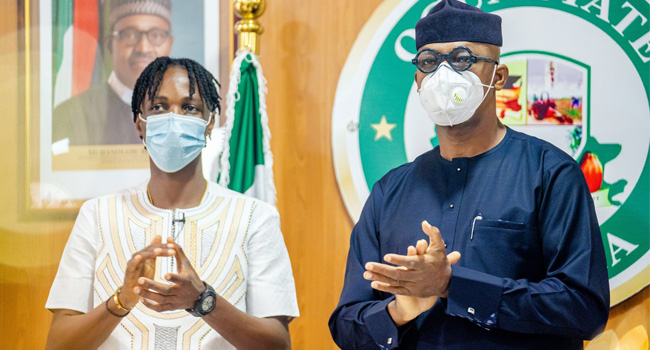 The winner of the recently concluded Big Brother Naija reality show, Olamilekan “Laycon” Agbeleshe, has been appointed as the Ogun State Youth Ambassador by the governor, Dapo Abiodun.

The governor also announced the donation of N5 million and a three-bedroom bungalow to the BBNaija winner at a ceremony which was held on Tuesday.

The appointment was announced while the governor hosted Laycon and his team in his Oke Mosan, Abeokuta, office.

Mr Abiodun said that the celebration was beyond the entertainment the house provided but it is celebrating Laycon who represented virtue, intellect and all-round talent.

“To celebrate you, we have made you the youth ambassador of Ogun State. I personally look forward to you being a model of good character, excellence, good virtue, honesty, and integrity to the youth of Ogun State.

The governor said the appointment given to Laycon was to motivate him to spend more time in his home state and to help inspire the youth, and engage them to stop vices like robbery, drug abuse, cultism, fraud, 419, and others.

Mr Abiodun congratulated Laycon on emerging the winner of the BBN show and conveyed his hope that his good character will be modeled by the youths.

He said, “One of the lessons that should be learnt from your success is that twenty of you were locked down in this house and you all came from different backgrounds and you were charged to relate with each other responsibly.

“There were rules and regulations that guided your cohabitation and one thing that you did exceptionally was that you behaved very responsibly. You demonstrated what the Yorubas will call the “Omoluabi” virtue. You have demonstrated that you are a true son of Ogun state.”

The governor had earlier written a congratulatory message to Laycon, shortly after he emerged the winner of the reality show and appreciated him for being a good ambassador of the state.

“The pacesetter that you are, you have emerged one of the best in academic and social engagements, so this victory is aptly a confirmation of your brilliance, intellect, and maturity.

“Our Administration will continue to support and empower the youth via numerous channels, towards inclusion, job creation, and the utility of our natural youthful energy. Youths of Ogun State, Nigeria, Africa and in fact the world over, see you as the face of positive revolution in the history of African entertainment,” he wrote.

#BBNaija: I Have Moved On, I Am Done With Laycon – Erica