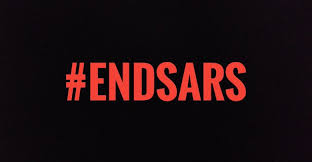 Many Nigerians on Saturday expressed anger over the activities of men of the Special Anti-Robbery Squad of the Nigerian police, calling for the unit to be proscribed.

The #EndSars hashtag was the number one trend on social media app, Twitter for several hours, bringing back to the fore calls for the proper handling of rogue, high-handed police officials.

Saturday’s outrage appeared to have been triggered by a post from a Twitter user who said he recorded SARS officials shooting “a young boy dead at Ughelli, Delta state . .  . in front of Wetland hotels. They left him for dead on the roadside and drove away with the deceased Lexus jeep.”

It is yet unclear what actually took place in Delta, but a video circulating on social media shows men chasing a police vehicle.

When contacted, Commissioner of Police in Delta State, Hafiz Inuwa, told Channels Television that his men did not shoot anyone.

“What happened was that they were on patrol when they saw a Lexus jeep parked by the roadside,” he said. “Immediately, the Lexus jeep saw the patrol jeep, they just zoomed off.”

The police gave chase, caught up with the Lexus, and occupied it, Inuwa said. However, one of the suspects tried to jump out of the moving vehicle and, in the process, sustained injuries. “He is still alive and in hospital,” the Commissioner said.

Meanwhile, another Twitter user said members of SARS in Bayelsa arrested her cousin who had just stepped out to have a hair cut.

The 19-year-old was arrested after the officials found a picture of a white woman on his phone, the Twitter user, using the handle GloryBaee, said

They demanded N50,000 for his release but eventually collected N35,000 to set him free, according to an update she posted.

The Convener of the #EndSars movement, Segun Awosanya on Saturday described the issue of SARS as a “madness” but called for Nigerians to “engage strategically.”

Former Vice President, Atiku Abubakar condemned SARS’ “cruel actions against our people” and called for a review of the unit’s operations.

SARS “was set up to confront violent crimes such as armed robbery, kidnapping and other related crimes,” Atiku said. “However, the unit has today morphed into an oppressor of the Nigerian masses who strive every day for a better life.

“Reports of intimidation, harassment and outright extortion by officers of the Special Anti-Robbery Squad (SARS) have continued unabated.

“I strongly condemn their cruel actions against our people, and I urge the government to rise to the occasion and nip this monstrosity in the bud with the seriousness it deserves.

“It is expedient that the activities of SARS are reviewed to ensure that the rogue elements are excised from the unit and sanity returned to its operations.”

In his response to social media reports, public commentator, Dr. Joe Abah wondered whether the Nigerian government and Police are “not aware of the nefarious activities of SARS or that they support it? I don’t understand.”

The call for the disbandment of SARS is a long-running national issue fuelled by countless testimonies of ordinary Nigerians.

After one of such public outcry in 2018, then acting President, Yemi Osinbajo, directed the Inspector-General of Police to immediately overhaul SARS’ management and activities.

In June 2019, President Muhammadu Buhari received the report of the Presidential Panel on SARS Reform and ordered that its recommendations be implemented.

But reports of police brutality have not abated.

“Police brutality in Nigeria is not arbitrary or accidental,” human rights lawyer, Ayo Sogunro, said on Saturday. “It is part of a systemic method of keeping socially and economically marginalized Nigerians under control.

“This is why we say #EndSARS will not happen by mere legal reforms. We will need political transformation.”