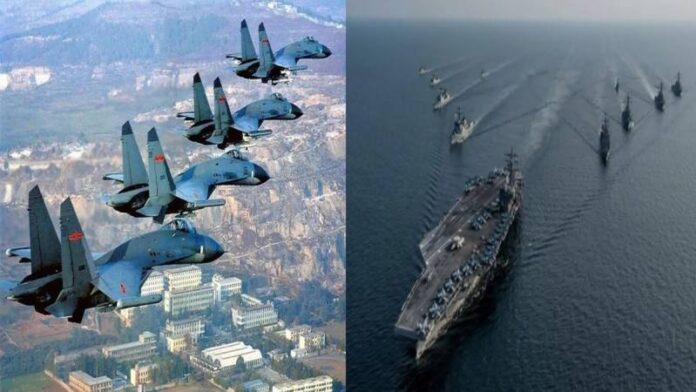 Several US warships were cruising in waters near Taiwan on Tuesday, US military officials said, amid Chinese anger over House Speaker Nancy Pelosi’s controversial visit to the island Beijing claims as its territory.

As China announced it would hold live-fire military drills in the Taiwan Strait in response to Pelosi’s visit, the US Navy’s Seventh Fleet said the nuclear-powered aircraft carrier Ronald Reagan was operating in the Philippine Sea, south of Taiwan.

The US Navy published images of the usually Japan-based Ronald Reagan conducting maneuvers with the cargo ship USS Carl Brashear on Sunday.

The Ronald Reagan was accompanied by the USS Higgins, a destroyer that is part of its strike group, a US Navy official said on condition of anonymity.

The aircraft carrier and its group are “on a routine operation in the Western Pacific,” a US official said on condition of anonymity.

Additionally, the amphibious assault ship USS Tripoli was operating east of Taiwan, the US Navy official said, confirming reports from the United States Naval Institute (USNI), a professional association with close ties to the Navy.

The Ronald Reagan and the Tripoli are both carriers of the latest generation F-35 fighter jets, according to the USNI.

US officials have sought to reassure Beijing that the positioning of these two ships in the region was not linked to Pelosi’s visit, who became the highest-ranking elected US official to visit the island since predecessor Newt Gingrich traveled there in 1997.

National Security Council spokesman John Kirby told CNN that Washington would make sure Pelosi had a “safe and secure visit.”