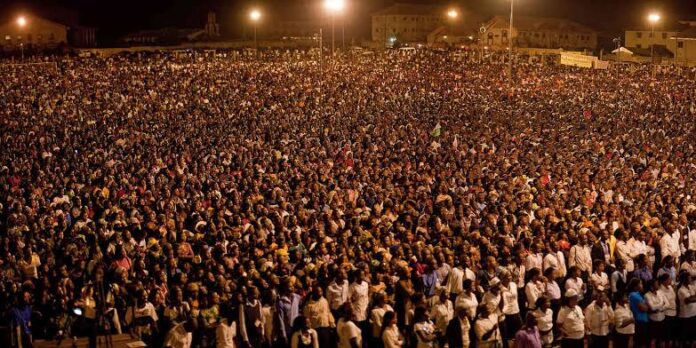 When you ask some Nigerians, they would summarise 2020 to be January, February, Lockdown, #ENDSARS and Weddings, all in the bid to tell you how long the year has been for them.

From having to survive a ravaging pandemic that grounded economic activities and forced the nation into total lockdown to a nationwide protest against police brutality and to the worst recession in decades, 2020 has been unprecedented.

Despite these, however, Nigerians have a way of cracking humour at the gloomiest of times. This they have done by creating humorous and witty slogans online to, in local parlance, “catch cruise.”

Here are some of the slogans that were popular in 2020.

Sọ̀rọ̀ sókè
Arguably the year’s most significant slogan, sọ̀rọ̀ sókè resonates well among young Nigerians, 80 per cent of whom are below 40. This generation has often been taunted as docile and indifferent to national socio-political discourse.

Meaning “speak up,” the catchphrase became the face of the #ENDSARS agitation by Nigerian youths which demanded an end to police brutality and justice for victims of police brutality.

The slogan had been around before now. Not only was it a street lingo used sarcastically to urge on a sluggish person to wise up, it had featured in the lines of some singles and a few Yoruba movies to spur a bland character to brace up.

But the slogan made its full debut this year alongside “werey dey disguise” (to show faux-shyness), and it was infectious too that even Lagos State Governor Babajide Sanwo-Olu used it to appeal to a horde of agitated protesters in the bid to reassure them during the #EndSARS protests.

After meetings with the President, IGP, Lagos CP and the NGF today, I will like to sòrò soke about what we are immediately doing in Lagos to build trust, #EndPoliceBrutality and ensure we don’t have to address these issues again.

After meetings with the President, IGP, Lagos CP and the NGF today, I will like to sòrò soke about what we are immediately doing in Lagos to build trust, #EndPoliceBrutality and ensure we don’t have to address these issues again. pic.twitter.com/g0wt3dHcu0

Although the protesters won’t have any of that, he was able to calm some nerves.

Don’t leave me.
Haunted by a pandemic and months of forced lockdown, the “don’t leave me challenge” served as a precious reprieve for millions of Nigerians and it quickly spread across the world particularly on Twitter, Instagram and Tiktok.

The brainchild of Josh Alfred, a Nigerian comedian popularly known as Josh2funny, the challenge involves using puns and prop comedy to spark humour.

Egged on by his hype man, Bello Khabir, Josh2funny electrified the social media in March when he punned about the word “leaf”, saying he could not talk because he was on leave. Beneath his feet was a leaf. Since then the challenge has gathered a life of its own and has not looked back since then.

His View, My View.

God Will Punish The Two Ofview

O wrong nau
When a Nigerian wishes to rebuke you for doing something, they tell you “O wrong nau,” a code-switch catchphrase from Yoruba and English meaning “it is wrong.”

But that’s not to say what you are doing is wrong. It could just be your interlocutor craving to crack you up.

For instance, why would you not share this piece after reading it? O wrong nau.

This life no balance
This slogan is used to describe how unfair and uneven life is. At times it is yin for some and yang for others.

Or how do you explain how a Nigerian billionaire flew with his daughter to Italy for an hour to get gelato, an Italian variant of ice cream made from milk and sugar and other flavouring, when there is another man’s son somewhere who barely gets pipe borne water to drink?

Quick stop in Italy for some ice cream!🍦🇮🇹 #FamilyFirst pic.twitter.com/D4wKMdhcNs

They would tell you it’s because this “life no balance.”

Wahala for who no…
When 24-year-old American singer, Enisa, wanted to warm her way into the hearts of Nigerians, she first adopted a Nigerian name, Eniola. For that, she got an overwhelming outpour of love on twitter from Nigerians.

“My tomorrow, did I tell you I fell for you before I met you?” came the response of a fan. “Did I tell you that in your eyes I can see my tomorrow Enisa?” Other fans had a good laugh too.

My tomorrow , did I tell you I fell for you before I met you? Did I tell you that in your eyes I can see my tomorrow Enisa? pic.twitter.com/RUlqSUduY1

Another variant of the slogan is “wahala be like bicycle.”

We meuvve
To urge themselves on to move on after a miss, Nigerians would say “we meuvve”. The slogan is used to buoy up someone to try again and not give in but show the typical Nigerian can-do spirit.

It also used to inspire someone to dwell more on positivity and what can be changed as against despairing over a down moment. So let’s “meuvve” on.

Na the matter we dey settle
Imagine a situation where the situation is so dire that to resolve it would require some ingenious conflict resolution masterstroke, that’s when this slogan is used.

Mr. A bought Twitter account from Mr B. Mr. A only only paid 70% that he will balance up.

Na the matter we dey settle here 😂 Please A or B? pic.twitter.com/KDnJMahsb0

Forget the urge to always shalaye
Talk less, act more – that is the message passed by this slogan. It is often used to discourage people from being loose in order to stay out of troubles or indict themselves.

It was the stunning last line used by Nigerian artiste Falz in his movie Quam’s Money which served as a cliffhanger in anticipation of the second part of the comedy.

That’s to tell you, with a subtle hope that it continues to blossom, you drip with riches and grace. This is done by waving the index and middle fingers.

Me as a…
One of the latest of the year, this slogan is purely aimed at hurl jibes. The face of the meme is Nigerian artiste, Osita Iheme, also known as Pawpaw.

The “me as a Nigerian” series, for one, is a satirical depiction of the Nigerian society and how people in different professions are likely to behave.

E Be things
To show perplexion, you hear E Be things. Once you hear that, look out for the tone of finality because that will be all. E Be things.

Other slangs that trended in 2020 include: I cannot comman goan kill myself; sense will not kill me; ko necestri; God no go shame; mofo o; he shock you?; E choke.

We hope you add other slangs that were left out as you have fun.