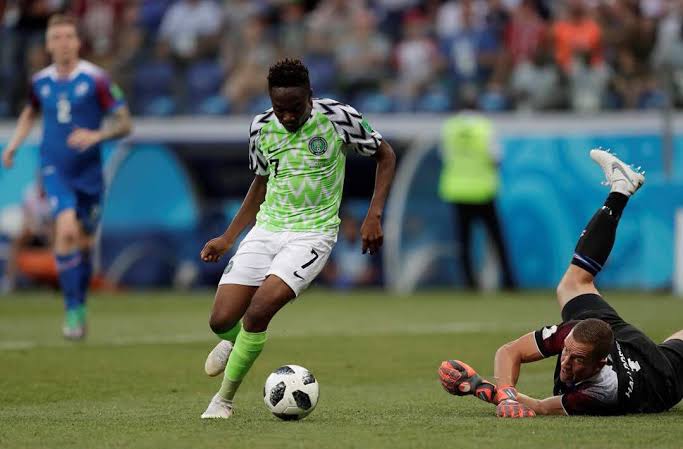 Despite the coronavirus pandemic that obstructed most activities, including sports in 2020, a handful of Nigerian sporting personalities gave us all something to cheer about in the turbulent year.

Even though the signs are not all pleasant yet, many are optimistic 2021 should be a better year nonetheless.

Ahead of a loaded year filled with several sporting activities including the Olympic Games, the media made a shortlist of seven Nigerian sports personalities to look out for jn 2021

Elizabeth Anyanacho
The 21-year-old is the first Nigerian female taekwondo athlete to qualify for the Olympics in 16 years after Olympian Princess Dudu achieved the feat at the 2004 Olympics in Athens.

Despite the limitations occasioned by COVID-19 and paucity of funds, Anyanacho and his mentor Chika Chukwumerije in the past months have been working tirelessly for a good outing in Tokyo.

Many thanks to my club team mates for voting me as the ‘2020 Athlete of the Year”. Thanks for making me a better person. I appreciate you. I will work even harder in 2021.#TeamCCSFAwards #RoadtoTokyo2020ne #WeBelieve pic.twitter.com/EwCnzKjaBR

With her hunger to succeed and the guidance from someone who has been there and done that, one cannot bet against Anyanacho causing a stir at the Olympics and possibly returning with a medal

Jordan Nwora
Nwora Jordan could be Nigeria’s ‘Micheal Jordan’ in the making as the 22-year old is already making a name for himself in the slam and dunk game.

Jordan is already an integral part of the Nigeria men’s basketball team, D’Tigers, who will be stepping up their campaign in the 2021 Afrobasket qualifiers.

Having done exceptionally well in College basketball and earning a draft to NBA with Milwaukee Bucks, expectations are high that Jordan can play himself into the reckoning and also become a figure to reckon with on the big stage.

Zaidu Sanusi
Currently, the only recognisable Nigerian left in the UEFA Champions League, Sanusi is becoming an imposing figure for his club, FC Porto, and for the Nigeria national team, the Super Eagles

A late bloomer, who came into prominence in the latter part of 2020, the left-back has shown enough promise to worth looking out for in 2021.

Adekuroye Odunayo
The athlete turned wrestler is on this list as one of Nigeria’s best prospects for a medal at the Tokyo Olympics.

Apart from the Bronze medal won by the football team in Rio 2016, Nigeria has failed to win any shade of medal in back-to-back appearances at the Olympics.

So there is no gainsaying that officials are desperate to end that poor trend in Tokyo.

Odunayo is currently ranked second in the world in her category and after narrowly missing out on a podium finish at the Rio Olympics, she should get it right this term in Tokyo.

Ahmed Musa
Though some might wonder why the Super Eagles captain is on this roster, the Year 2021 could be a historic one for the fleet-footed winger.

The retired duo of Vincent Enyeama and Joseph Yobo are currently Nigeria’s most capped players with 101 appearances each, Musa can overtake them in 2021 so watch out!

Amaju Pinnick
After taking the back seat for many years, Nigeria is making waves again as far as global football politics is concerned and one man carrying the country’s flag in this regard is Pinnick.

In a well-calculated move, Pinnick has opted out of the race for the CAF presidency to vie for a seat on the FIFA Council.

Africa has seven members on the Council and the Nigeria Football Federation boss is working hard to be one of them in 2021.

Nigerians have all the reasons to look out for how the March 2021 election billed to take place in Casablanca, Morocco, will pan out.

Joseph Arumala
In the entire shortlist, this is the only greenhorn selected and that shows the huge potential the 16-year old possesses.

A product of Sporting Dreams Academy of Abuja, Arumala is part of the newly-assembled Golden Eaglets team by coach Fatai Amoo.

Described as a player in the mold of ‘Luis Saurez’ in a team review by ScoreNigeria, one of Arumala’s undeniable assets is his superb technique.

If he plays to his full potential, the Delta-born winger or striker could join the exclusive list of Nigerian football superstars like Kanu Nwankwo, Victor Osimhen, and the likes that started out first from the Golden Eaglets before becoming world-acclaimed stars.