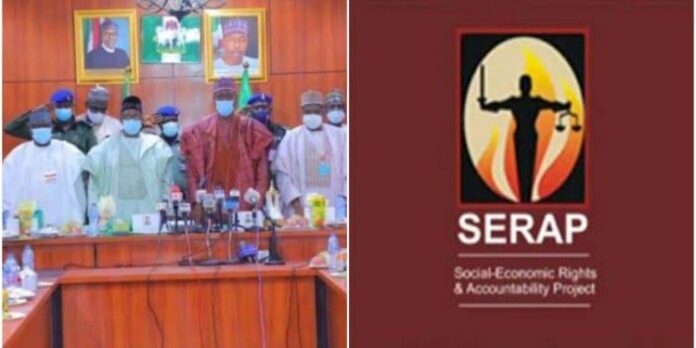 SERAP said this in a tweet on Tuesday while reacting to the call by the northern governors for more social media regulations in the wake of the #EndSARS protests.

“We’ll sue the Northern Governors’ Forum and @nassnigeria if any Social Media bill is passed and signed by President Buhari. Nigerians have a right to freedom of expression online.

“We won’t accept any illegal attempts to interfere with that right #NoToSocialMediaBill,” the human rights group tweeted.

Northern governor’s had earlier on Monday after a meeting with northern traditional and political leaders called for censorship and control of social media.

Their decision was contained in a communique read by the Chairman of the forum who is the Governor of Plateau State, Simon Lalong.

The northern governors lamented over what they described as the devastating effect of uncontrolled social media in spreading of fake news and in turn, fuelling crisis.

The Protection from Internet Falsehood and Manipulations Bill, popularly known as the Social Media Bill was sponsored in 2019 by Senator Mohammed Sani Musa.

The President of the Senate, Ahmad Lawan earlier in 2020 said that the National Assembly would not arrogate to itself the power of exclusively passing the social media bill into law without inputs from Nigerians.

Lawan said freedom of speech and the inalienable rights of man are issues that should not be compromised under any guise.

SERAP Sues Buhari, Others Over ‘Missing N3.1bn In Finance Ministry’