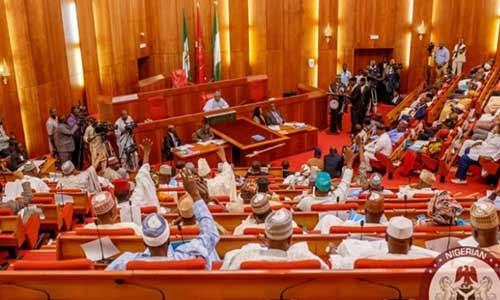 The Senate has recommended that President Muhammadu Buhari remove the Service Chiefs and replace them with people with fresh ideas and solutions.

The lawmakers made this recommendation at Tuesday’s plenary during a debate on security in the nation and the attack on rice farmers in Borno State which left at least 40 dead.

The Upper Chamber also recommends the recruitment of 10,000 civilian JTF to complement the efforts of the armed forces and explore a multilateral partnership with Niger, Chad, and Cameroon.

Former governor of Borno State, Senator Kashim Shettima had earlier raised the motion at plenary noting that President Buhari should remove the security chiefs and replace them with new ones with ideas to address the alarming insecurity in the country.

The lawmaker also claimed that 67 farmers were killed in the attack.

He warned that any government that cannot protect the lives of its citizens has lost any iota of legitimacy.

Senator Ali Ndume in his contribution to the debate lamented that the national budget is woefully inadequate and soldiers do not have enough arms and ammunition.

He said he has observed in the course of visiting military formations soldiers sharing arms and ammunition. He also claims that he has not seen any soldier wielding a brand new AK47 rifle.

Senator Ndume suggested that Nigeria should explore the use of mercenaries to assist in fighting Boko Haram.

Zabarmari Massacre
43 farmers were killed on Saturday morning around Marrabati and Hammayya villages, near Zabarmari in Jere Local Government Area of Borno State by Boko Haram terrorists while on their way to their farms.

The farmers were waylaid on their way to their rice farms which they were harvesting before the surprise attack happened.

Some other farmers were also taken away by the insurgents.

The State Governor Babagana Zulum during the burial of the farmers on Sunday morning lamented that “it is disheartening that more than 40 citizens were slaughtered while they were working in their farmlands,” and also expressed condolence.

The governor later on Monday gave recommendations to the Federal Government on how to win the war against the terrorists. He noted that engaging mercenaries, as well as the immediate recruitment of youths into the military to boost its strength, will go a long way to defeat the insurgents.

President Muhammadu Buhari condoled with the victims and their families.

In a tweet, on Monday, President Buhari said he has given a ‘marching order’ to the Nigerian Military to take the fight to the insurgents, not on a one-off, but on a continuous basis until “we root out the terrorists.”