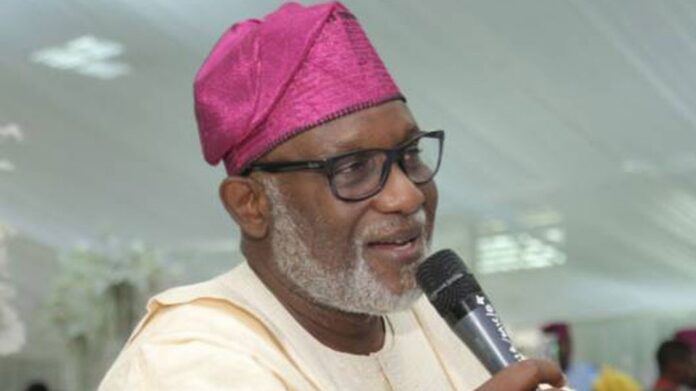 Governor Rotimi Akeredolu has called on all members of the All Progressives Congress to work for the success of the APC in the governorship election.

Akeredolu, who emerged the candidate of the party in the last primary after defeating nine other aspirants, specifically appealed to the aggrieved members to sheathe their swords and get united for the purpose of the party’s victory in the election.

The governor stated this at the reconciliation meeting with stakeholders, held at Heritage Hotel, Akure, the state capital on Sunday.

Some of the chieftains of the party who attended the meeting were Chief Pius Akinyelure, Chief Olusola Oke, Dr Segun Abraham, Mr Isaacs Kekemeke, Chief Bode Summonu, Mr Ade Adetimehin, and Tayo Oluwatuyi among others.

The governor, who decried the disunity in the party said, “Before now, our disunity or lack of cohesion had robbed us of many advantages, which included our poor showings in the 2019 Presidential and National Assembly Elections.

“This is, however, not the appropriate time to apportion blames, as all of us have a responsibility to make things work better and ensure unity in our party, going forward, even though this situation is not peculiar to us in Ondo State. It is a feature of any strong and big party like ours.

“We saw the merit in unity during the 2019 House of Assembly Elections when, against all odds, we won overwhelmingly. We will like to appeal to all to bury the hatchet and come together. APC is the only party we can call our own. Of a truth, this is where we rightly belong. This is where we can find expression for our ambitions, without let or hindrance.

“I, therefore, enjoin all of us to sheathe our sword and forgive one another with a view to working for the resounding success of our party in the October 10, 2020, Gubernatorial Election. Let us join hands together with the leadership of our party at the National and State levels to make sure that our party remains strong to win all elections in the state, local, state, and federal.”

2023 Presidency: Tinubu Pledges To ‘Consult Widely’ Before Making A Decision