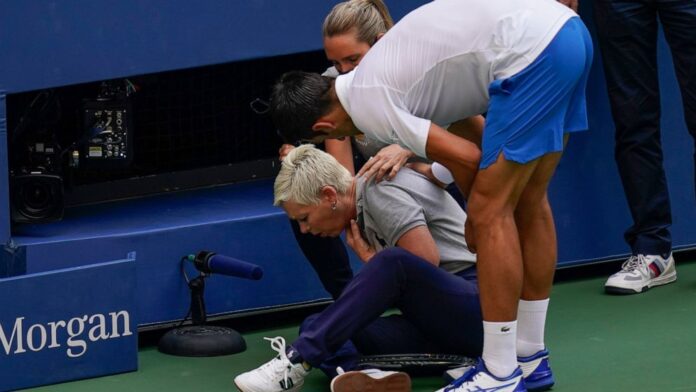 Novak Djokovic, the top men’s player in a sport with its share of meltdowns and misbehavior, became the first No. 1 disqualified from a Grand Slam singles tournament after he inadvertently struck a line judge with a ball hit in frustration at the United States Open on Sunday.

Djokovic’s sudden ouster from the country’s premier tennis tournament immediately made a bizarre U.S. Open even more strange. It has been staged during the coronavirus pandemic, with players sparring with local health officials over contact tracing and the top women’s doubles team abruptly disqualified on Saturday. This was also the latest misadventure for Djokovic in 2020, a year in which he has expressed personal hesitation about vaccines, organized an exhibition tournament that led to coronavirus cases, including his own, and sowed division in the tennis world by forming a potential breakaway players’ organization.

Djokovic lost his cool when trailing 5-6 in the first set in the fourth round against Pablo Carreño Busta, having lost several recent points. He had just lost a game while serving after being treated for pain in his left shoulder earlier in the game, giving Carreño Busta the upper hand.

After losing the final point of the game, he pulled a ball from his pocket and smacked it with his racket toward the back of the court. It hit a line judge, standing about 40 feet away, in her throat. She cried out and crumpled to the ground, and Djokovic rushed to her side to check on her condition.

She later walked off the court, still visibly in distress, and was treated by a tournament physician. But after a lengthy discussion with tournament referee Soeren Friemel at the net, Djokovic was defaulted, as disqualifications are known in the sport.

“This whole situation has left me really sad and empty,” Djokovic said in an Instagram post in the early evening. “I checked on the linesperson and the tournament told me that thank God she is feeling ok. I’m extremely sorry to have caused her such stress. So unintended. So wrong.”

Djokovic continued: “I need to go back and work on my disappointment and turn this all into a lesson for my growth and evolution as a player and human being. I apologize to the US Open tournament and everyone associated for my behavior.”

Djokovic’s exit delivered an immediate blow to the tournament, which was considered unlikely to take place when New York was one of the epicenters of the coronavirus. The tournament is being held without spectators for the first time and with players and their teams tested daily and restricted to their lodging and the Billie Jean King National Tennis Center.

Djokovic was the only member of the “Big Three” in men’s tennis to play the event this year, with Roger Federer out for the season after two knee surgeries and reigning champion Rafael Nadal choosing to remain in Spain and prepare for the rescheduled French Open and other clay-court tournaments.

Djokovic only decided to come to New York last month after lengthy negotiations with tournament officials over quarantine rules. But his default deprives the men’s event of the only player remaining who has won a Grand Slam singles title.

Djokovic has won 17 major singles titles. Men’s tour officials have been eager for a new champion to emerge to challenge the dominance of the Big Three, but this was certainly not the way anyone expected it would happen.

Some television viewers expressed puzzlement online at how a mere gesture of frustration, without intent to harm anyone, could lead to a disqualification when so many of the tournament’s historic losses of composure, like one involving Serena Williams in the 2018 U.S. Open final, carried penalties that were less severe. Williams received a series of conduct violations — for coaching, for racket abuse and for verbal abuse of the chair umpire — and was docked a point and then a game but not defaulted.

The Grand Slam rules bar players from the abuse of balls as well as unsportsmanlike conduct, and tournament officials have the authority to disqualify a player immediately if they deem a case sufficiently serious.

Players can be defaulted for “hitting a ball or throwing a racket without intent to harm” if someone is injured on the court, said Gayle David Bradshaw, a retired ATP Tour vice president for rules and competition. “In this case, there was no intent, but there was harm, and the officials had no choice but to do what they did,” he said.

Officials have some latitude in deciding how serious an offense might be, but Friemel said Sunday’s ruling was clear-cut.

”Based on the fact that it was angrily, recklessly hit, and the line umpire was hurt clearly and in pain, he had to be defaulted.” Friemel said. “We all agree he didn’t do it on purpose, but he hit her, and she was hurt.”

Friemel said the discussion was lengthy with Djokovic because of the significance of the decision. “Defaulting a player at a Grand Slam is a very important, very tough decision,” Friemel said. “You need to get it right.”

During a warm-up tournament for the U.S. Open that was staged at the same site, Aljaz Bedene, a Slovenian player, inadvertently hit a cameraman with a ball that he tapped in frustration and received a warning but was not defaulted because the cameraman immediately made it clear that he had suffered no injury.

Carreño Busta, who is the 20th seed and from Spain, advanced to the quarterfinals with the default. Djokovic left the stadium without speaking to news reporters.

“If it would have landed anywhere else, we’re talking about a few inches, he would have been fine,” said Alexander Zverev, a German player who was watching inside Arthur Ashe Stadium.

In a statement, the United States Tennis Association said that because of the default Djokovic would be fined the prize money he would have earned in addition to any fines that will be levied because of the incident. He faces a fine of up to $20,000 for skipping his mandatory post-match news conference.

Djokovic, 33, has won five of the last seven Grand Slam singles titles and had dropped just one set in his first three matches at the U.S. Open. But the first set against Carreño Busta was a tight affair, and Djokovic was testy. At one stage earlier in the set, he smashed a ball in frustration toward the side of the court, hitting no one.

He failed to convert three set points on Carreño Busta’s serve in the 10th game, But when serving at 5-5, Djokovic fell hard on the second point while shifting direction and got up wincing and grabbing at his left shoulder. He received treatment in his chair, returned to the court trailing by two points and then lost the game, still looking uncomfortable with his two-handed backhand and resorting to a one-handed drop shot on two occasions.

Miffed, he smacked another ball in frustration, then extended his left arm in apology toward the line judge as soon as he saw she had been struck. Goran Ivanisevic, Djokovic’s coach, slumped in his seat in the players box in the cavernous, nearly empty stadium, seemingly aware of the implications.

Andreas Egli, a Grand Slam supervisor, and Friemel soon arrived on court to investigate the situation and discuss the incident with Djokovic and the on-court officials, including chair umpire Aurélie Tourte.

“I know it’s tough for you whatever call you make,” Djokovic said to Friemel as they talked at the net.

“Well, the rules are the rules,” said Carreño Busta, who had lost his three previous matches with Djokovic. “The referee and the supervisor did the right thing but it’s not easy to do it, no?”

The incident was reminiscent of one involving Denis Shapovalov, who was defaulted in a Davis Cup match in 2017 after inadvertently hitting chair umpire Arnaud Gabas in his left eye after smacking a ball in anger, fracturing Gabas’s orbital bone. In 1995, British star Tim Henman became the first player in the Open era to be disqualified from Wimbledon after inadvertently hitting a ball girl, Caroline Hall, in the head from close range. Henman, playing with Jeremy Bates, was defaulted during a doubles match for unsportsmanlike conduct.

In 2012, David Nalbandian, an Argentine star, was defaulted from the singles final at Queen’s Club after kicking a wooden advertising board and injuring linesman Andrew McDougall’s left leg.

But until Sunday, no world No. 1 had been defaulted in the midst of a Grand Slam tournament. The closest equivalent for shock value at the U.S. Open was in 2009 when Serena Williams, seeded No. 2, received a point penalty for threatening a line judge who had called a foot fault in her semifinal against Kim Clijsters. The penalty was assessed on match point, handing Clijsters a 6-4, 7-5 victory.

Ilie Nastase, a combustible Romanian, was defaulted in the second round of the 1979 U.S. Open after a series of tirades and then reinstated in a match against John McEnroe, who was later disqualified himself for misbehavior in the fourth round of the 1990 Australian Open. But both Nastase and McEnroe were past their primes.

The modern men’s superstars have been genteel by comparison, in part because of a stricter code of conduct.

Djokovic had never been defaulted on tour until Sunday.