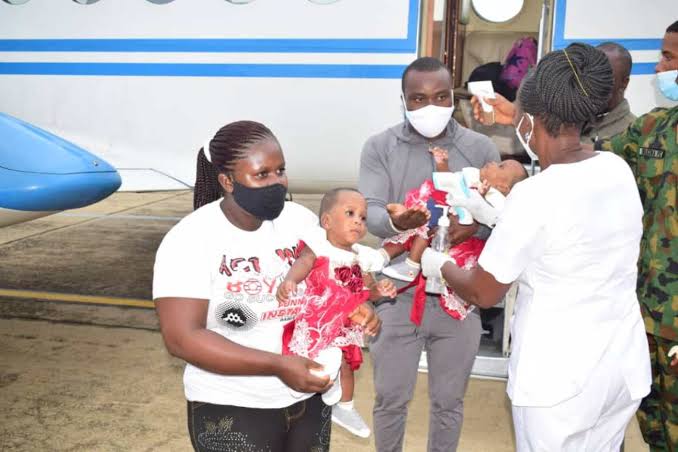 Parents of the conjoined twins that were successfully separated at the Federal Medical Centre in Yola arrive in Bayelsa on August 30, 2020.

The Nigerian Air Force has airlifted a set of twins after successfully undergoing a separation surgery at the Federal Medical Centre in Yola, Adamawa State.

This was disclosed in a statement issued on Sunday by NAF spokesman, Air Commodore Ibikunle Daramola.

According to him, the twins – Mercy and Grace Aeiygbenmi, along with their parents and medical team have been conveyed to their base in Yenagoa, the Bayelsa State capital.

Reacting, the Deputy Governor of Bayelsa State, Lawrence Ewhrudjakpo, who received them thanked the Chief of the Air Staff, Air Marshal Sadique Abubakar, and the entire Air Force for the support provided throughout the process.

On his part, Abubakar, reassured Nigerians that the Air Force will continue to sustain its humanitarian relief operations, including medical outreaches, to alleviate the sufferings of victims of insurgency, banditry and natural disasters.

The twins who were born on December 1, 2019, were joined at the abdomen, and was successfully separated by the collective efforts of medical professionals.

Missing Nigerian Air Force jet yet to be found