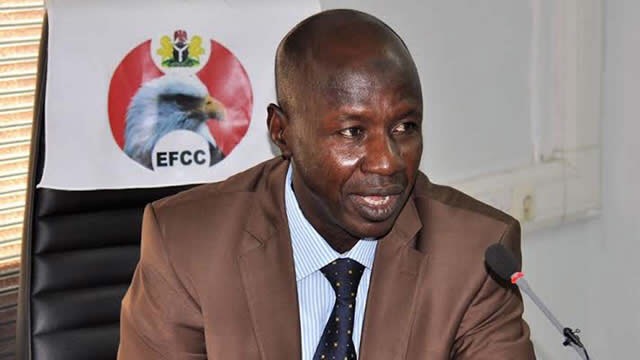 The Economic and Financial Crimes Commission was established in 2003 by the administration of former President Olusegun Obasanjo. According to information gleaned from its website, the EFCC Act mandates the commission to combat financial and economic crimes and also to prevent, investigate, prosecute and penalise economic and financial crimes. The commission  is  as well charged with the responsibility of enforcing the provisions of other laws and regulations relating to economic and financial crimes, including: Economic and Financial Crimes Commission Establishment Act (2004), The Money Laundering Act 1995, The Money Laundering (Prohibition) Act 2004, The Advance Fee Fraud and Other Fraud Related Offences Act 1995, The Failed Banks (Recovery of Debts) and Financial Malpractices in Banks Act 1994, The Banks and other Financial Institutions Act 1991; and Miscellaneous Offences Act.

Since the Commission was established, it has had four chairpersons, namely, Mallam Nuhu Ribadu (2003 – 2007); Mrs. Farida Waziri (May 2008 – November 23, 2011); Mr. Ibrahim Lamorde (November 23, 2011 – November 9, 2015) and the incumbent, Ibrahim Magu, who, until his suspension on Tuesday, was appointed on November 9, 2015. It is instructive that one thing common to all of them is that controversies trailed either their appointments or performances in office. Curiously, they were all alleged to have abused their office with some doses of corrupt practices.

Ribadu was not only removed from office but demoted from the rank of Assistant Inspector General of Police to Commissioner of Police. He reportedly survived two assassination attempts. He was alleged to have been involved in abuse of human rights of suspects among other things. Instances were cited of the agency under him using a few members of the state Houses of Assembly to impeach Governors Diepreye Alamieyesiegha of Bayelsa State and Joshua Dariye of Plateau State in order to strip them of immunity and pave the way for their prosecution.

Waziri was allegedly removed from office for falling out with then Attorney-General and Minister of Justice, Mohammed Bello Adoke, over the prosecution of cases that the commission brought before the court. It was also alleged that Waziri might have compromised the investigation into financial misappropriation against a former Governor of Bayelsa State, Timipreye Sylva, and that of former Edo State governor, Lucky Igbinedion. However, former President Goodluck Jonathan in the Vanguard newspaper of February 11, 2020 claimed that he removed Waziri from office due to “disenchantment from many Nigerians and mounting international pressure against Mrs. Waziri’s continued stay in office”. As such, she was removed in the national interest.

As regards Lamorde, The Cable of November 9, 2015 reported that “One George Uboh had petitioned the Senate, alleging that Lamorde failed to remit more than N2.05 trillion, being funds recovered from corrupt leaders. He was also accused of diverting over N1 trillion recovered from the sale of confiscated properties belonging to convicted officials including the late Alamieyesiegha, and Tafa Balogun, a former Inspector-General of Police.” But he denied all the allegations.

Of the four chairpersons of the EFCC, the most controversial is the embattled Magu who was appointed to replace Lamorde. He was twice denied confirmation by the eighth Senate on the strength of an indicted memo against him by the Department of State Services. On Monday, July 6, 2020, he was dragged before a presidential probe panel headed by former President of the Court of Appeal, Justice Isa Ayo Salami (retd.). This newspaper in its July 7 edition reported that, “It was learnt that 24 allegations were levelled against Magu who has been acting as chairman for almost five years. Most of the allegations, it was learnt, emanated from a report by the Attorney-General of the Federation, Abubakar Malami (SAN), and a DSS report which was submitted to the Senate in 2016 and 2017. The EFCC boss was accused of living above his means, fraternising with corrupt persons, diversion of recovered funds and many others. He was also accused of insubordination.”

Other allegations levelled against him by Malami include, “Discrepancies in the figures of funds recovered by the EFCC, disposing of assets, especially buildings seized from corrupt politicians and others, without approval, or knowledge of the AGF’s office, which is the supervisory ministry of the EFCC.”

Since the story broke, I have been on several media channels to discuss it. The media outlets include, Kiss 99.9 FM Abuja, Nigeria Info 95.1 FM Abuja, Family Love 99.9 FM Umuahia and Voice of America. My take on Magu’s probe, however, is that as desirable as it is, due process should be followed. I despise the manner of his forced invitation by the interrogators akin to arrest and his detention. Why should he be invited on the day he is supposed to appear before the presidential probe panel?  The DSS knows his home and office and should have sent his letter of invitation to the panel there.  Why ambushing him on the street and rail-roading him to forcefully go before the probe panel? Why was the probe panel secretly empanelled and its members and terms of reference not made public? Why were the media not allowed to cover the probe?

The President, Major General Muhammadu Buhari (reed.), must have seen what most Nigerians cannot see in Magu. Interestingly, Nigerians had high expectations that he would be dropped and replaced when the DSS indicted him in its report to the Senate in 2016 and reconfirmed that report in 2017. However, Buhari kept Magu as the EFCC chairman in perpetual acting capacity. Even at that, according to Section 3 of the EFCC Act 2004, the tenure of chairman of the EFCC is four years subject to reappointment. Until his suspension, Magu was in his fifth year as acting Chairman of the anti-graft body and I never had that he was reappointed for the second term. Is this an error of omission or commission on the part of the President?

Magu, however, has done his own bit and there are reports that his achievements in office in terms of recovered loot, and conviction of suspects far outweigh those of his predecessors. It may well be because he is the longest serving chairman of the Commission. Under our jurisprudence, a suspect is deemed innocent until proved guilty. So, it could be safe to say Magu is deemed innocent and hoping he gets a fair hearing from the presidential probe panel. It will be a great injustice if his rights are abused and he’s humiliated out of office. Many keep wondering why all chairmen of the EFCC were embroiled in controversies. Is it a case of the oft repeated corruption fighting back?

Wherever this Magu saga will end, I hope it will not dampen the spirit of staff of anti-corruption staff in general and those of EFCC in particular. Rather, I hope it will boost their morale and strengthen the fight against corruption. We should be mindful of the fact that the international community is watching and will form their opinion on whether the Buhari regime’s anti-corruption fight is a ruse or real.

Beyond Magu and its travails, I align my thoughts with those of the Executive Director of Civil Society Legislative Advocacy Centre and representative of Transparency International in Nigeria, Auwal Musa Rafsanjani, that Nigeria needs a legal framework on asset recovery and management. Indeed, there is a need for a central database where all government agencies involved in asset recovery such as the police, Nigerian Customs Service, Independent Corrupt Practices and other related Offences Commission and the likes will register the assets they have recovered from suspects. Disposal of such assets should also be transparently done.