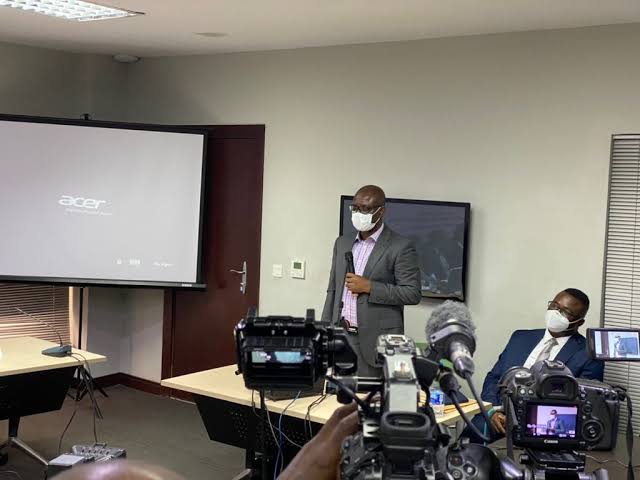 The Managing Director of the Lekki Concession Company, Abayomi Omomuwasan, has submitted video footage recorded by the company’s surveillance camera on the night of October 20, when soldiers opened fire on #EndSARS protesters at the Lekki tollgate area in Lagos.

He submitted the footage on Tuesday at the 4th sitting of the panel of Inquiry and Restitution set up by the state government to look into the allegations of brutality and high-handedness by personnel of the now-defunct Special Anti-Robbery Squad (SARS).

Omomuwasan, however, noted that the surveillance cameras had stopped recording at about 8:00 pm.

Nearly two weeks after the incident, investigations are still ongoing to determine what really happened at the scene of the peaceful protests and who was responsible for the shootings.

The Nigerian Army has insisted that soldiers did not shoot at the protesters, despite viral videos showing men in military uniforms firing the shots.

Although they admitted that soldiers were deployed to ‘restore normalcy’ in the area, the Acting Deputy Director, 81 Division, Army Public Relations, Osoba Olaniyi, in a statement last Tuesday, described reports of a massacre by the officers as “untrue, unfounded, and aimed at causing anarchy in the country”.

Members of the Lagos State Judicial Panel of Inquiry and Restitution at the 4th sitting on November 3, 2020.

Olaniyi also stated that the decision to involve the military was taken by the Lagos State Government after a 24-hour curfew was imposed.

The reports have further been complicated by reports that the surveillance cameras at the tollgate had been removed hours before the shooting of October 20.

It was also widely reported that the lights at the toll gate were switched off minutes before the shooting happened, aiding the incident.

But the LCC has since come out to deny any involvement or connivance.

Although the curfew was to commence at 4:00 pm that day, but later shifted to commence for 9:00 pm, many were still seen protesting across the state.

At the Lekki Toll Gate which had been one of the major converging points, peaceful and unarmed protesters were also still seen gathered in large numbers at the time.

The situation, however, took a turn for the worse around 7:00 pm when the security operatives stormed the area and started shooting sporadically.

While investigations are ongoing with the panel of inquiry sittings underway, Governor Babajide Sanwo-Olu is, however, yet to confirm the position of the army with regards to who gave the orders.

In an interview with CNN, the governor said: “from the footage that we could see, because there were camera’s at that facility, it seemed to me that they will be men in military uniform which should be the Nigerian Army.”

When asked further if military forces ordered the shooting of the peaceful protesters, he said: “yes, they were there, that’s what the footage shows”.

Viral videos online from the scene of the shooting had shown several persons who sustained gunshot wounds, raising fears of multiple fatalities.

But according to the governor, only two persons are confirmed to have died from the incident so far.

The judicial panel is expected to ensure justice to the victims of police brutality, with some survivors being invited to share their ordeal.

The first sitting of the panel which commenced last Tuesday, with the first petitioner, Okoli Aguwu, sharing grisly details of his ordeal in the hands of SARS officers.

He said he spent about one and a half months in detention, and he was tortured to the point where he lost two of his teeth.

Today, the panel commenced with the testimony of another young man, Mr Ndukwe Ekekwe, who said he was randomly arrested by SARS officials on February 16, 2018.

Without any valid reason, he said he was beaten up and then transferred to their office in Ikeja.

Beyond the beating, Ekekwe said he was stabbed at different parts of his body by the officers, and later taken to his shop at Alaba they broke his shop and started auctioning his products.

Thereafter, as he started shouting for help, he said the officers took him up a two-story building and threw him down – an incident which caused him to break his spine.

Although he survived the incident, Ekekwe is now confined to a wheelchair.

He told the panel that he would like to be compensated, as he also lost goods worth N15million.