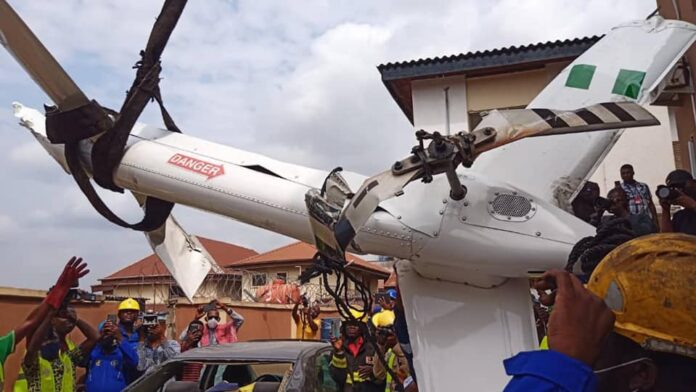 The pilot of the helicopter that crashed into a residential at Opebi, Ikeja on Friday tried in vain to avoid causing many casualties, witnesses said.

The pilot who eventually lost his own life had apparently targeted an open space in the area for emergency landing when he sensed trouble, only for the aircraft to crash into 16A, Salvation Road.

One other person in the Bell helicopter 206B3 also died immediately while the third victim, who was said to be the engineer of the ill-fated helicopter, died at the intensive care unit of the Lagos State University Teaching Hospital (LASUTH) where he was admitted after he was rescued from the accident scene.

The owner of the property on which the helicopter crashed, Mrs. Comfort Adeniyi-Johnson, was said to be all alone at home reading her Bible when the unexpected happened.

The nonagenarian was profuse in thanking God for saving her life.

A widow, Mrs. Oluyemisi Olugbode, 77, whose property was also affected, said she was grateful to God because there was no one in her house when the crash occurred.

She said that she and her brother had gone to the hospital because she was not feeling well, adding that they had barely arrived at their destination within the neighbourhood when they received a call that a helicopter had crashed into her building.

Mrs. Olugbode, who sang a hymn of praise, said she could not thank God enough because it could have been her body that would be retrieved from the debris.

She said: “To God be glory, dominion, might and power. I was not in.

“All of us had just gone out and there was no one in the house. We had just arrived at the place we went to when we received a call about the crash.

“We would have come home from the place we first went to, but I insisted my brother must take me to a place he had refused to take me to on Thursday. It was as soon as we got there that we received the call that a helicopter had entered my house.

“I did not understand how that could happen, but this is the result. Fortunately, the next house is our own. It is my husband’s cousin’s house.

“See my house now, the whole wall is broken, roof broken, cars crushed and so many damages. But we are grateful because we, ourselves, are not damaged.

“I cannot thank God enough because it could have been my bones under the helicopter. I would have probably carried something to the back and then the helicopter would just land.

“But because it is not my turn yet and God said I will not die that way, that is why I was not around. My brother and I were just coming from the hospital because I am not feeling well.

“I don’t have any work. I am a widow and just managing. Imagine if this helicopter had fuel in it; the whole street would have finished.

“Such a thing should not happen in neighbourhoods like this. We should take caution for the future. This is not funny. This place could have been a school. Imagine how many casualties we would be counting if that was the case.”

The helicopter crashed at about 12 noon.

It had left the Air Force Base Port Harcourt earlier in the day after undergoing routine checks.

Witnesses said the aircraft first hovered around the area and suddenly began to shake as it nosedived with a heavy noise.

It fell in between two compounds; the cockpit on one side and the tail on the other.

The walls of the compounds were damaged as were some cars parked therein.

Mrs. Awokpile, who owns one the properties on which the helicopter crashed, was busy reading her Bible when she heard a heavy noise akin to thunder. The building shook and she ran out to see what was amiss.

Outside, she was confronted with the wreckage of the helicopter and a crowd of sympathisers who had come to rescue the occupants of the aircraft.

“It landed where it was least expected,” she said of the helicopter.

“Unfortunately, the helicopter was between my house and my daughter-in-law’s house. The tail was at the end here and the head at the other side. I was reading my Bible when it happened. I heard a big sound, the type I had never heard in my life.

“There was smoke but there was no fire.

“Our light (electricity) was on and is still on now. All I have to do is thank God because she (daughter-in-law) was out and came in just at the nick of time.

“Thank God it did not land on the roof.”

A fabric shop owner in front of the building, Mr Mark Okeke, told the News Agency of Nigeria (NAN) that the helicopter was seen in the air struggling to crash-land into the canal but “suddenly picked up and faced the building’’.

“We just heard a loud sound with heavy dust from the house.

“Many occupants of the building were not at home.”

Within a short time, emergency agencies had rushed their workers there.

The Lagos State Police Commissioner was also there.

Rescuers had a hectic time trying to gain access to the scene.

Helicopter owners appeal for calm
The owners of the helicopter, Quorum Aviation Limited, yesterday appealed to the public for calm.

The company in a statement said: “A light helicopter belonging to Quorum Aviation with registration Number 5N-BQW, flying from Port-Harcourt to Lagos, crashed between two buildings in Ikeja en-route to Murtala Muhammed Airport, Lagos.

“As soon as we received news of the accident, we promptly informed the aviation authorities, Accident Investigation Bureau (AIB) and the Nigerian Civil Aviation Authority (NCAA).

“Preliminary reports indicate that of the three souls on board – all crew, two of the crew members lost their lives whilst the third one is currently receiving treatment at a hospital.

“We have been made to understand that nobody in the building, nor in the vicinity was injured, for which we are grateful.

“We hereby express our heartfelt condolences to the families of the crew who lost their loved ones in this tragic accident.”

AIB commences probe, black box not yet found
Officials of the Accident Investigation Bureau (AIB) commenced investigation into the accident immediately although they were yet to recover the black box at press time.

Officials of LASEMA also removed the wreckage from the scene of the incident.

An AIB source said it appeared the helicopter’s tank was not filled up at the time of the accident, otherwise it would have exploded on impact and there would have been fire in the area.

Speaking to journalists after inspecting the scene of the crash, the AIB head of the investigation of the crash, Anthony Diepreye, said many things could have caused the crash, adding that they were yet to find the black box if there was one.

“We have not seen the black box if there is any. This kind of accident could be caused by so many things, the Investigation will look at different situation and tell us what happened,” he said.

An officer of the Air Navigation Standards, Nigeria Civil Aviation Authority (NCAA), Mr. Ahmed Aba, said the AIB should be allowed to do their work and come out with safety recommendations.

“We will wait for AIB to do a thorough Investigation and the NCAA will thereafter implement whatever safety recommendations that they make,” he said.

Buhari mourns victims President Muhammadu Buhari commiserated with the families of the victims.

Special Adviser on Media and Publicity, Femi Adesina, in a statement said the President prayed to God to console the bereaved and heal the injured.

He said: “President Muhammadu Buhari commiserates with families, friends and associates of victims of the Bell 206 helicopter operated by Quorum Aviation which crashed Friday into a building in Opebi, Lagos State.

, the President prays that God will console the bereaved families, grant peace to the souls of the dead and speedy recovery for the injured.”

Sanwo-Olu: We’ll unravel cause of accident
Governor Babajide Sanwo-Olu of Lagos State also commiserated with families, friends and associates of the victims.

In a condolence message through his Chief Press Secretary, Mr. Gboyega Akosile, Sanwo-Olu promised that government would work with all the relevant Federal Government agencies to unravel the remote and immediate causes of the accident so as to prevent a reoccurrence in the future.

The governor advised residents of Opebi and its surrounding to go about their business peacefully, saying: “There is nothing to fear as men and officers of the State emergency services were promptly deployed to the scene of the crash and they had brought everything under control.

The environment is also safe and secure.”

The governor prayed that God would grant the deceased eternal rest and grant the families they left behind the fortitude to the bear the irreplaceable loss.

Tinubu prays for victims
All Progressives Congress National Leader, Asiwaju Bola Tinubu, commiserated with families, relations and friends of those who lost their lives in the crash.

While calling on the aviation authorities to investigate the cause/s of the crash, Asiwaju prayed that Almighty Allah might console the families of the victims of the crash and grant the deceased eternal rest.He wished the survivor of the crash soonest recovery.

Obaseki condoles with Sanwo-Olu, Lagos govt over crash
Governor Godwin Obaseki of Edo State condoled with Governor Sanwo-Olu and the people of the state over the helicopter crash in Ikeja.

He said: “I condole with the government and people of Lagos State over the unfortunate helicopter crash in the Ikeja axis of the state, which claimed two lives. Our prayers are with the families of the departed soul and we pray God grants them the fortitude to bear this irreparable loss.

”I send condolences to Governor Sanwo-Olu and his team, who are doing everything possible to manage the situation and bring comfort to the families of the deceased.”

Speaking on the crash, Olakanle, who was sworn-in a day before the incident, called for restraints in speculating on the factors responsible for the crash.

Such endeavour, he noted, would only muddle the pieces of evidence and harm the course of the investigation.

”The only thing left to be done is what the Lagos State Government first responders have done: evacuate the victims, be on the alert to douse any fire outbreak and preserve ground zero as much as possible to preserve the shreds of evidence that could help the course of aviation investigation,” Olakanle said.