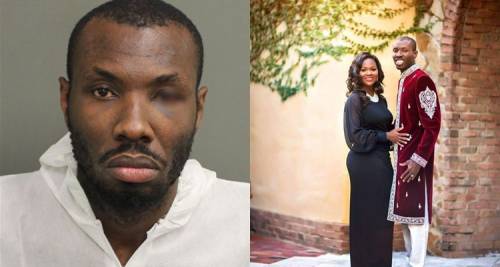 Ghanaian pastor, Sylvester Ofori, has been arrested for shooting his wife dead in the United States of America.

Ofori killed his wife, who was identified as Barbara Tommey, outside the Navy Federal Credit Union branch where she worked.

Orlando Police Department Chief said she was shot and killed as she arrived for work on Tuesday morning.

He was later arrested by detectives of the Orlando Police Department.

Police said a warrant was served at the suspect’s apartment and Ofori taken into custody.

“You can tell that she’s trying to get inside (the credit union). Unfortunately, he killed her,” Police Chief Orlando Rolon said.

“You can tell she was surprised by what was happening.”

An eyewitness, who only provided her first name as Lisa, spoke with local media, saying Ofori was walking behind her before he brought out his gun and shot her.

“The guy was walking behind her. The next thing I knew, he raised his hand with the gun in it and he shot her.

“I started running and as I’m running, I hear three or four more shots.

“I’m shaken up right now, I’m still shaken up,” she said. The police added that the shooting was captured on surveillance video, adding that Ofori will face a charge of first degree murder with a firearm.