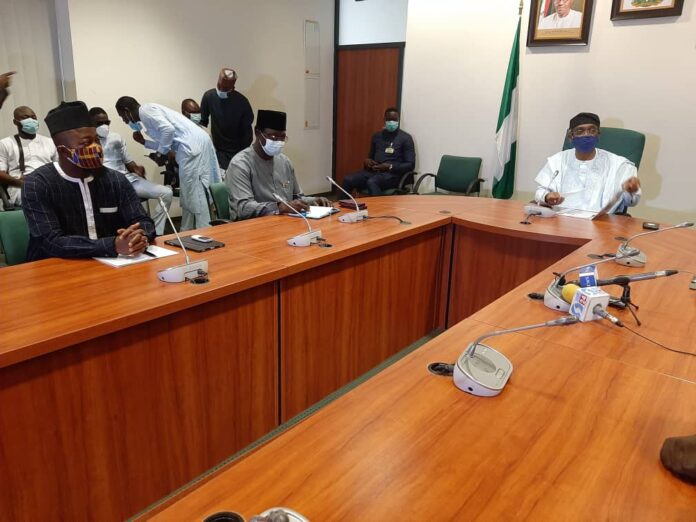 The Federal Government on Sunday met with Labour Unions to avert the planned strike billed for Monday, September 28.

A statement signed by Charles Akpan, the spokesman of the Labour and Employment Ministry, noted that the meeting was to commence at 7:00 pm.

According to the communique, the Honorable Minister for Labour and Employment, Dr. Chris Ngige was to meet with the Organized Labour at the Presidential Villa Banquet Hall.

As of the time of writing this report, the closed-door meeting was still ongoing and the outcome remains unknown.

Earlier on Sunday, the Nigeria Labour Congress (NLC) insisted that it will carry on with its proposed strike action with regards to the recent increase in electricity tariff and the removal of petrol subsidy.

This resolve was taken following a closed-door meeting between the NLC and the Speaker of the House of Representatives, Mr Femi Gbajabiamila.

Mr Gbajabiamila met with representatives of NLC, at the National Assembly Complex in Abuja, in an attempt to mediate and broker an amicable solution to the impasse between Organised Labour and the Federal Government (FG).

Briefing journalists after the meeting, NLC President Comrade Ayuba Wabba said the proposed strike by the union will proceed unless the FG addresses the issues.

Reacting to the court order restraining the NLC from downing tools, Mr Wabba said the organization has not been served with the order and cannot speak on it.

He, however, noted that there is a judgement of a Federal High court stopping the increase of electricity tariff which the FG has refused to obey.

According to the NLC President, the proposed strike will only fail to hold if the govt makes a u-turn before 12 midnight today.

Labour cannot go on a strike in good conscience

At the brief before the closed-door meeting on Sunday, the Speaker of the House of Representatives, Mr. Femi Gbajabiamila said Labour cannot go on a strike in good conscience as the consequences will be dire on Nigerians who will feel the hardship caused by the industrial action.

He stated that the House of Representatives shares the same thoughts and philosophy with the NLC as regards the plight of workers and the House of Reps championed the cause of free electricity and had advised that the hike in tariff be put in effect from 2021.

Nevertheless, the Speaker said he worries about the consequences of the strike and what will be achieved at the end.

In reply to the Speaker’s comments, the NLC President, Comrade Ayuba Wabba argued that the increase in electricity tariff and removal of petrol subsidy is bringing hardship to Nigerians, stressing that the organization is asking the FG to reverse the policy decisions.