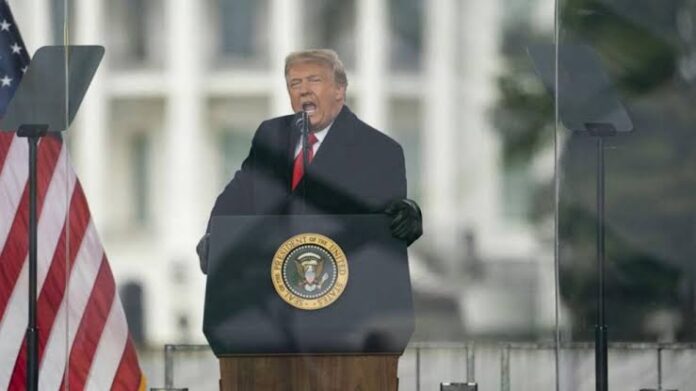 Facebook has announced an “indefinite” ban on President Donald Trump, saying the United States leader will not be allowed to use the platform at least until after the inauguration of a new president.

President-elect Joe Biden is to be sworn in on January 20.

Mr Trump’s account was suspended by the social media platform on Wednesday in the heat of the violence that rocked the Capitol, Washington DC.

Pro-Trump supporters had besieged the Capitol Building on Wednesday in order to prevent the Congress from certifying the electoral victory of Joe Biden in the November 2020 presidential election.

The ensuing violence following the invasion led to the death of four persons with several others injured including police personnel.

Mr Zuckerberg in a message posted on his verified Facebook page on Thursday said the platform took the decision to suspend Mr Trump’s account because he was using his page to encourage his supporters to commit violence.

“The shocking events of the last 24 hours clearly demonstrate that President Donald Trump intends to use his remaining time in office to undermine the peaceful and lawful transition of power to his elected successor, Joe Biden, he said.

Mr Zuckerberg further said Mr Trump’s decision to use his platform to condone rather than condemn the actions of his supporters at the Capitol building has rightly disturbed people in the US and around the world, saying “we removed these statements yesterday because we judged that their effect — and likely their intent — would be to provoke further violence.”

Following the certification of the election results by Congress, Mr Zuckerberg said the priority for the whole country must now be to ensure that the remaining 13 days and the days after inauguration pass peacefully and in accordance with established democratic norms.

He noted that over the last several years, Facebook has allowed “President Trump to use our platform consistent with our own rules, at times removing content or labelling his posts when they violate our policies. We did this because we believe that the public has a right to the broadest possible access to political speech, even controversial speech. But the current context is now fundamentally different, involving the use of our platform to incite violent insurrection against a democratically elected government.”

Mr Zuckerberg said the risks of allowing the President to continue to use Facebook service during this period are simply too great.

He said the suspension of Mr Trump’s Facebook and Instagram accounts will remain indefinitely and for at least the next two weeks until the peaceful transition of power is complete.

Mr Biden, the President-elect, is due to be sworn in on January 20. His victory has been certified by the Congress while the incumbent, Mr Trump has grudgingly conceded to allow a peaceful transition of power