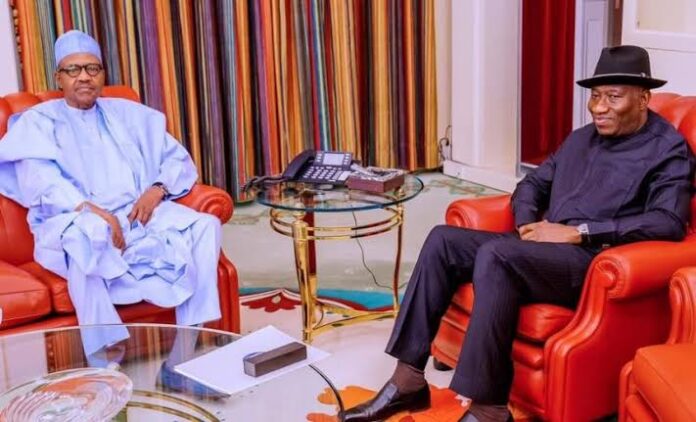 During his meeting with the President, Jonathan briefed his successor on the crisis rocking Mali, calling for dialogue to resolve the problem.

Jonathan was accompanied by members of the team on the Economic Community of West African States (ECOWAS) Mission to Mali.

This was disclosed in a statement issued by the Special Adviser to the President on Media and Publicity, Femi Adesina.

“We told them that no international organization, including the African Union (AU), United Nations (UN), and others, would agree with their position. We continued to emphasize the need for dialogue,” Jonathan was quoted as saying.

The former President added that the Constitutional Court had been reconstituted and inaugurated, while vacancies in the Supreme Court had been filled, thus sorting out the judicial arm of government.

On his part, President Buhari thanked Jonathan for what he called “the stamina you have displayed” on the Mali issue.

He counselled further consultations with the Chairman of ECOWAS, President Mahamadou Issoufou of Niger Republic.

Jonathan’s visit to the villa comes barely a month after he met with his successor to brief him on the political development in Mali.

The former President who is part of the envoy from the West Africa bloc ECOWAS made a surprise visit to the Sahel on August 11, on the eve of opposition-led demonstrations against embattled President Ibrahim Boubacar Keita.

Speaking at a press conference in the capital Bamako that evening, Jonathan said “demonstrations do not solve problems per se” and talks would resolve the crisis.

As part of the measures to broker peace in the country, West African leaders met on July 24 amid protests for the resignation of President Keita.

The day-long summit, however, ended without a deal to soothe the country’s escalating political crisis.

Five of the region’s leaders met Keita and leaders of a protest movement clamouring for his resignation, as a long-running jihadist insurgency threatens to throw the country into chaos.

The presidents of Senegal, Ivory Coast, Ghana, Nigeria and Niger have scheduled meetings with Malian President and leaders of a protest movement clamouring for his resignation.

But the intervention failed to seal a deal and Niger’s President Mahamadou Issoufou — at the talks along with the leaders of Senegal, Ivory Coast, Ghana, Nigeria — said Western African bloc ECOWAS would hold a summit on July 27.

Deepening crisis
Keita, who came to power in 2013, has come under increasing pressure to end Mali’s long-running jihadist conflict.

President of Niger Mahamadou Issoufou arrives in Bamako on July 23, 2020, where West African leaders will gather in a fresh push to end an escalating political crisis in the fragile state of Mali.

The poor nation of some 20 million people has been struggling to contain an insurgency that has driven hundreds of thousands of people from their homes since 2012, despite the presence of foreign troops.

In the latest violence, a French soldier was killed and two others were wounded in a suicide car bomb attack in northern Mali, according to France’s presidency and the French army.

But much of the current tension was sparked in April, when the constitutional court tossed out 31 results from the parliamentary elections, benefiting Keita’s party and sparking protests.

Tensions then ratcheted up into a crisis on July 10 when an anti-Keita rally organised by the June 5 Movement turned violent.

Three days of clashes between protesters and security forces left 11 dead and 158 injured in the worst political unrest Mali had seen in years.

But the June 5 Movement had already rejected any outcome that did not involve Keita’s departure.