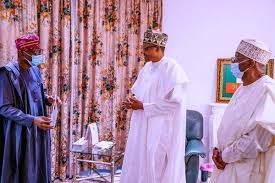 Governor Babajide Sanwo-Olu has met with President Muhammadu Buhari over the nationwide protests seeking an end to police brutality in the country.

The governor spoke to journalists after the meeting, giving insight into their discussion and the role of the governors on the issue.

Read his interview below:

“I just had a brief meeting with Mr. President. It is indeed an honour he has accorded me this afternoon to meet with him, even after the very important meeting with other governors.

The essence of the meeting is to pass on the clarion call of all our youths that are protesting in different parts of the country on the END SARS NOW. Mr. President graciously accepted the letter that was given to me by the youths to personally deliver to him. He graciously received the letter and we went through it very very briefly. I explained to him all the things that we are doing.

Earlier today, I also met with the IGP, who also shared the same sentiments regarding the various well thought demands by youths. He has also assured me that later today that they will be making further pronouncements.

Part of the take away for me is that all the governors are on the same page, we are having a governors forum meeting tomorrow. The IG will be briefing is at that meeting and further clear directives and decisions will be taken by all the governors.

I can tell you and all our youths out there that Mr. President has listened, your letter is documented, it has received attention and he has assured me that all of the things that you have said there he will see how he will begin to implement them almost immediately.

Like I did mention earlier today in Lagos, we had pushed ahead to implement the first two and the third one which I needed their approval, so that we can put this thing behind us. And in partnership with the youth, we understand and we feel them. They have spoken and spoken very well and we heard loud and clear, nationally and internationally. So, I believe it’s been a just cause, it’s a cause that is worth fighting for. We have made them realize that we have listened to them as their leaders and have taken up the pieces of all the lessons and we have all learnt from it and we believe that not only will we see a better police reform, a better relationship between the government and the ones that are governed but we will begin to see a better relationship at all spheres of government going forward.

How can the government regain the trust of the people especially the youths out there protesting against police brutality?

But this is the first time that governors are taking this up, this is the first time I am aware of that we are even joining in that kind of a crusade. Personally, I have been out two times within the last 48 hours, in solidarity with them, acknowledging first that their points are well taken and their constitutional rights. So the first point is that it is well taken, we are not in denial, we are not colouring it, we accepted all the issues that have been said and so this is very different from the others. And there have been genuine efforts to love that conversation forward.

Certainly, some are work in progress. I told Mr. President that they want us to increase the salary of the police he did agree with me. But you and I know that that will not happen today, it is a budgetary process. Everybody agrees and accepts that indeed it must happen.

The IGP said some of them said that we should set up a phycho-social analysis for most of them. They might financial, domestic, environmental pressure that we do not know they have. He said he will make sure they go through that process, so these are real engagements we are seeing and is different from other things that have happened.

They said we should set up trust fund to be able to pay some compensation. There is no compensation you can pay for the loss of a loved one but it’s just something to ameliorate that suffering. I had earlier made announcement on that, that has never happened before. And I am sure others also in my space will do the same, even the IGP is coming tomorrow to brief the governors. These are definitive steps that you are seeing that we are taking collectively, to ensure that we bring this to a final closure and we do not lose the lessons of what the youths have said to us clearly.

What physical things can the youths see to convince them?

When you say physically, obviously increasing the salary of police will not happen tomorrow. So it’s a process but you will see the conversation that indeed we all agreed that they need more. The physical thing you will see is that we have released all the Protestants arrested yesterday, not one of them stayed beyond three or four hours at the station, we released all of them conditionally. That is physical. The fund to compensate families that have lost loved ones has been done immediately, which is physical. So we are seeing those physical lines moving. There are some that will not happen today or tomorrow and will take time.

You gentlemen of the press also have the responsibility to publicise the information clearly that indeed, their voices have been heard, their demands are genuine and real.

As a father, it’s a real concern when you realize that you don’t really know your son that much, given what my own son had faced, what my daughter had asked me to do. Indeed, it was a clarion call for me and so it speaks to how did we get here, how did we miss it and we are indeed grateful that they have been able to correct us and they have been able to show that they are indeed leaders of tomorrow.

So for me, their voices have been heard, their grievances are real and we are going to begin to see a better relationship going forward.