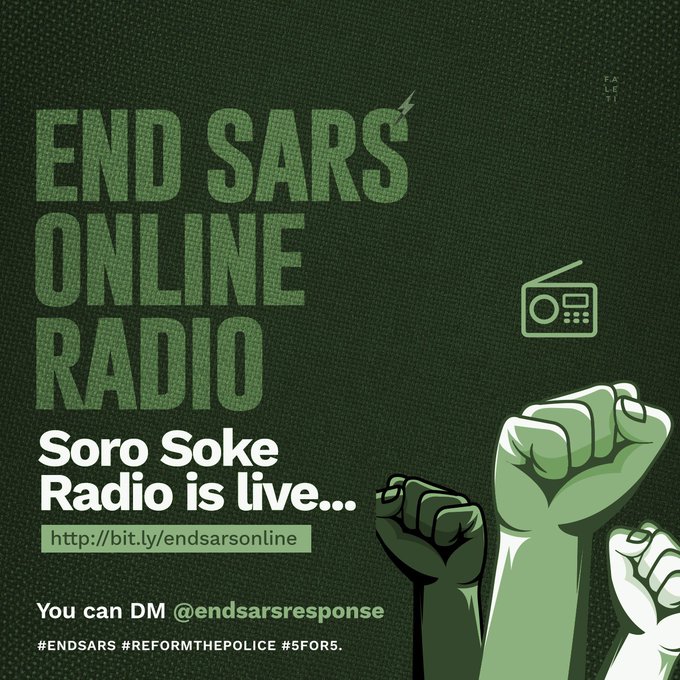 #EndSARS protesters on Sunday launched an online radio, called Soro Soke even as the protests continue across the country.

The Soro Soke radio has a bouquet of programmes aimed at educating and communicating with protesters and also coordinate activities nationwide.

Soro Soke radio which has gone live will also serve as a platform to report missing persons.

The mantra, Soro Soke, a Yoruba phrase which means ‘Speak Up,’ gained traction last week after protesters in Lagos told Governor Babajide Sanwo-Olu to ‘soro soke’ whilst addressing them.

Soro Soke radio has also opened a Twitter handle to serve as a link between listeners and the media outlet.

The #EndSARS protests calling for an end to police brutality; extrajudicial killings and scrapping of the Special Anti-Robbery Squad (SARS) – a unit of the police force notorious for human rights abuse –  have continued for over 12 days.

Nigeria’s police chief, Mohammed Adamu, had on heels of the disbandment of SARS, announced a new tactical unit – Special Weapons and Tactics (SWAT) – to replace the scrapped arm of the force.

Irked by the move, more Nigerians trooped to the streets, calling for the rejection of the new unit.

Using the #EndSWAT hashtag on the social media platform,  Twitter, the protesters believe the new arm of the police would be no different from the disbanded SARS.

They argue that the introduction of SWAT is ill-timed and does not align with their demands for a reformation of the country’s policing system.

Although the protest started in Lagos and Abuja and other major cities in the country, it has continued to spread to most towns across Africa’s most populous nation.

On Friday, the protesters held Jummat services and candlelight processions in Abuja and Lagos, honouring those who died from police brutality.

Some of the protesters had on Saturday, held prayer walks in several cities and towns, seeking divine intervention for Nigeria.