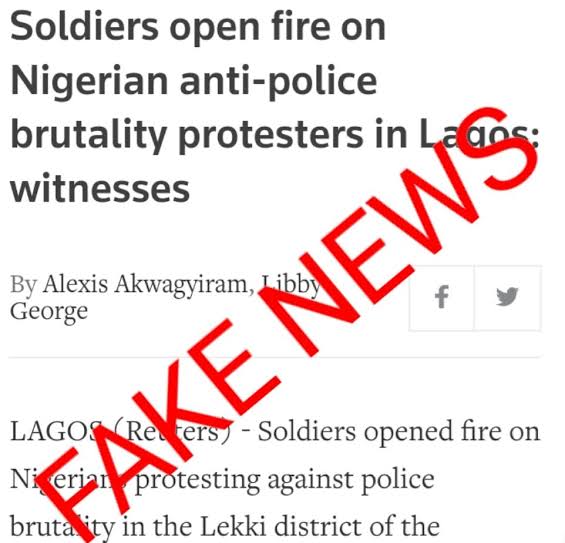 The army has, however, labelled the reports false on all its verified social media accounts.

The Nigerian Army has denied that its officials shot at protesters in Lekki Toll Gate Plaza on Tuesday evening.

The media earlier reported how security agents in military camouflage opened fire on protesters at the Lekki toll gate, in Lagos State.

The media learnt that the streetlights were put off and the CCTV cameras removed before the security agents stormed the venue.

Witnesses also told this newspaper that the attack on unarmed protesters after the Lagos State Government imposed a curfew in Lagos, left at least seven people dead. The figures could rise with many other protesters injured from the shootings.

Multiple videos captured by citizens show the moment soldiers opened fire on the protesters, and the clips show terrified citizens crouching and screaming as gunshots rented the air.

The army has, however, labelled the reports false on all its verified social media accounts.

When contacted on Tuesday evening, the spokesperson of the military outfit, Sagir Musa, told the media that protest is a civil matter and the army has nothing to do with the attack.

Meanwhile, when our reporter confronted him with the multiple evidence indicating that the shooters were soldiers, Mr Musa said; “I am not aware.”

Several Nigerians at home and abroad have condemned the killings of Tuesday night, describing it as an act of wickedness against the unarmed protesters.

Former Senate President Bukola Saraki condemned the actions of the government, urging the President to call the officers to order.

“I have watched with horror the use of force against the Lekki #EndSARS protesters. My heart bleeds for the country. It is sad and disheartening that this is happening. These are peaceful youth protesting to express legitimate concerns. It is unacceptable for any Government to turn its weapons on its own young people. What has happened in Lekki tonight is nothing but a massacre.”

“This shooting must stop immediately and the security agents that carried out this exercise should be ordered to stop. No life of any Nigerian youth taking part in a peaceful protest deserves to be taken.”

“Killing our defenceless youth is wrong — regardless of the circumstance. Killing our children our youth is also killing our future as a nation. We must take a quick walk back from this. We must do all that is necessary to protect and engage with the youth on all issues. Let the shooting stop and let fruitful dialogue commence,” Mr Saraki’s statement read.

The media had reported on the protest since it began about a fortnight ago. This newspaper reported how how protesters have staged peaceful demonstrations in major Nigerian cities, demanding for the dissolution of the Special Anti-Robbery Squad (SARS) of the police.

The protest led to the disbandment of SARS and the replacement with Special Weapons and Tactics (SWAT) squad. The federal government also promised to implement other demands of the protesters.

However, the protests still continued in major cities like Lagos, Ibadan and Abuja with hoodlums and security officials attacking the protesters in some of the cities.

The hoodlums broke into the Nigerian Correctional Service (NCS) facility in Benin, resulting in the escape of several inmates. Also, police stations were razed by the thugs in Lagos and Ibadan, the Media reported.

These pockets of violence resulted in the declaration of curfew by the Edo, Lagos, Ekiti and Osun governments.

Protesters have, however, remained defiant in the face of these restrictions, promising not to stop the demonstrations until all demands are met.