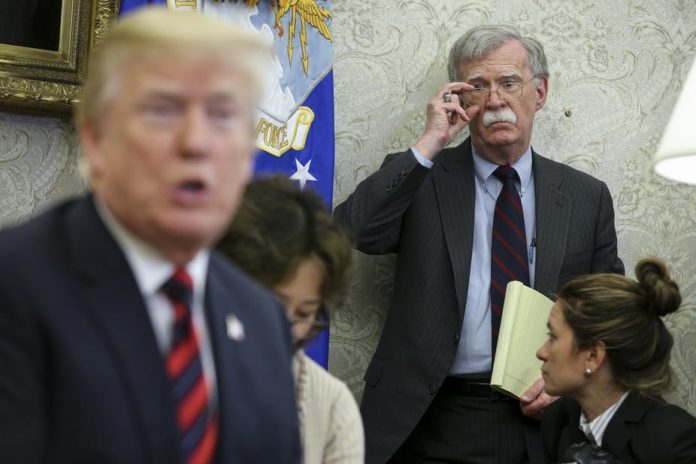 The Justice Department claims Bolton has not finished with the review process required of any author who had a government security clearance.

The Trump administration sued former national security adviser John Bolton on Tuesday, hoping to delay publication of his tell-all book, due to be released next week.

“The United States is not seeking to censor any legitimate aspect” of the manuscript, the Justice Department lawsuit says. It claims, instead, that Bolton hasn’t finished with the review process required of any author who had a government security clearance.

The lawsuit asks a federal judge for an order directing Bolton to urge his publisher to delay publication until the process is done. And it further asks the judge to require Bolton to put any profits from the book into a trust for the benefit of the government.

Legal experts predicted that the lawsuit would be unable to stop publication.

“The law in this area is clear. Except in very rare circumstances, the courts cannot stop a publisher from publishing materials in advance,” said Mark Rasch, a former federal prosecutor.

“That would be a prior restraint. While the government might be able to prosecute Bolton after the fact if he released truly classified materials, every time the government has tried to prevent someone from publishing what they believe to be classified, they have lost,” said Rasch, who is now with Kohrman, Jackson and Krantz, a Cleveland-based law firm.

Bolton’s book is well along in the publishing process, with copies having already been shipped to distributors. He also sat for an interview with ABC News scheduled to be broadcast this weekend.

The lawsuit, filed by the Justice Department’s Civil Division, says Bolton began the review process as required but lost patience as the process dragged on month after month. But the book included many references to classified information, some of it at the top-secret level, it says.

The publisher said the book would deliver an inside look at the White House during Bolton’s 519 days as national security adviser. “I am hard-pressed to identify any significant Trump decision during my tenure that wasn’t driven by reelection calculations,” the book says, according to material provided by Simon & Schuster.

Ben Wizner, director of the Speech, Privacy and Technology Project of the American Civil Liberties Union, said the lawsuit was doomed to fail. “As usual, the government’s threats have nothing to do with safeguarding national security, and everything to do with avoiding scandal and embarrassment,” he said in a statement.

President Donald Trump fired Bolton in September. Bolton and his unpublished book were in the middle of a political maelstrom earlier this year when Democrats demanded his testimony in Trump’s impeachment trial.

The request came after an explosive news report during the trial alleged that, in Bolton’s unpublished book, Trump personally tied aid for Ukraine to an investigation into former Vice President Joe Biden and his son Hunter Biden. Bolton’s account conflicted with that of the president, who described his talks with Ukrainian President Volodymyr Zelenskiy as a “perfect call” and later denied Bolton’s claim.

However, former White House official Fiona Hill told House impeachment investigators in October that Bolton was so disturbed by the efforts to get the Ukrainians to investigate Trump’s political rival that he called it a “drug deal.” He also referred to the president’s personal attorney Rudy Giuliani, who was also implicated in the Ukraine pressure campaign, as a “hand grenade.”

Senate Republicans rejected Bolton’s offer to testifyin the impeachment trial and largely rejected calls from Democrats to call more key witnesses. Shortly after the trial ended, Bolton said that even if he had testified, it wouldn’t have changed the outcome of the trial because of how House Democrats handled their investigation.