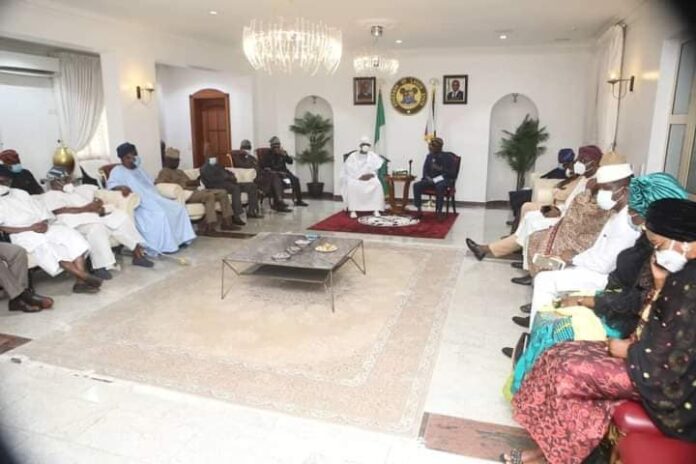 Senators from the south-west zone have visited Lagos State Governor, Babajide Sanwo-Olu, to commiserate with him on last week’s coordinated destruction of public and private properties in the state.

The delegation of the South-West caucus in the Senate led by Senator Ajayi Boroffice (Ondo North) visited the governor on Tuesday at the State House in Marina.

According to a statement by the governor’s Chief Press Secretary, Gboyega Akosile, the lawmakers sighed endlessly as they were shown pictures of the buildings destroyed in Lagos.

In his reaction, Senator Boroffice described the destruction as an “orchestrated tragedy” that must be thoroughly investigated.

He was worried that many youths working in the businesses that were destroyed would be rendered jobless, adding that it would take time for the owners of such businesses to recover, given the extent of the loss.

“Members of the South-West caucus in the Senate are here to console you over the demonic violence unleashed on Lagos. Government and private individuals suffered an incalculable loss in the unfortunate destruction that trailed the EndSARS protest,” he stated.

The lawmaker added, “Adequate decision had been taken by the government to attend to the demands of the protesters. Of course, some of the demands require a constitutional amendment and cannot be done immediately.

“The Senate showed its readiness to look into the issues with the necessary amendments.”

He said the burden occasioned by the destruction could not be borne by Lagos State government alone, stressing that the senators would be meeting with the leadership of the National Assembly to prevail on the Federal Government in assisting the state to recover and rebuild.

Senator Boroffice stated that the caucus would move a motion that would enable the Ministry of Foreign Affairs to catalog the ugly images from the destruction and send them to Nigerian embassies overseas for those in the Diaspora to see the proportion of damage wreaked.

In his response, Governor Sanwo-Olu thanked the lawmakers for showing solidarity, saying that law-abiding residents had suffered from the violence and borne the brunt in harsh ways.

He was also concerned that some Lagos communities were vulnerable to crimes, following the arsonist attacks on police stations and facilities housing security operatives.

The governor condemned the shooting of protesters at the Lekki Toll Plaza by soldiers, insisting that until after a thorough investigation, no one would know how many lives were lost in the incident.

He stressed that the two bodies found on the roads on Admiralty Road and Victoria Island had no link with the Lekki shooting, adding that most of those who were injured in the incident had been treated and discharged.

Governor Sanwo-Olu reiterated his commitment to a thorough investigation into the violence and the shooting of protesters by soldiers.

He promised that the findings of the investigative panel would be forwarded to relevant authorities for actions.