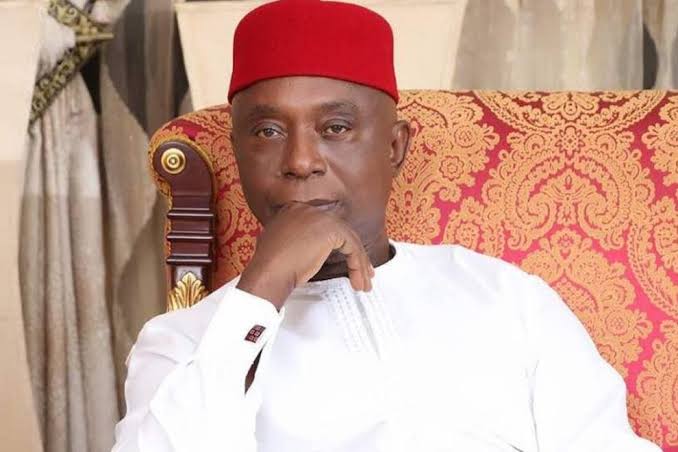 Residents of Idumuje Ugboko community in Delta State have accused former senator, Ned Nwoko, of using the police and Ministry of Justice to dubiously harass, intimidate and lock up elders and sons of the town.

The residents stated that Nwoko had successfully bought over senior policemen in Delta State and Abuja, who allegedly assisted him in intimidating and arresting those, who opposed his attempt to forcefully acquire additional 90 hectares of land from an area earmarked for all indigenes of the community.

In a “Save Our Souls” petition signed by Jerry Isichel and Daniel Osakwe and submitted to Governor Ifeanyi Okowa of Delta State, the residents accused Nwoko and the police of malicious destruction of property, disobedience to the order of the court, assault occasioning harm, abuse of public office, unlawful arrest, false imprisonment and conduct likely to cause a breach of peace.

The petition reads, “Ned Nwoko has visited untold cruelty on the people of Idumuje Ugboko. He has used the police and Justice Ministry to dubiously harass, intimidate and lock up our elders and sons, charging us with the most heinous crimes in Nigeria’s criminal penal code, terrorism and murder. Our sons have been languishing in jail for the past three years and denied due process because Ned Nwoko has used his billions of naira to compromise justice and the police in Delta State and Abuja.

“This unending crisis is engineered, fuelled and sustained by the same man just because the community rose in unison to oppose his attempt at forcefully acquiring additional 90 hectares of land from an area earmarked for all indigenes.

“In the year 2000, Ned Nwoko applied for and was magnanimously allocated 34 hectares of land, free of charge by the community. In his application, he expressed a desire to build a dairy farm. Chief of the guidelines for this allocation as, administered by a Land Committee, is that any individual allotted land in that development area of the town must utilize the land within five years, for the purpose it was allotted. Any contravention of this guideline will result in the said land reverting automatically to the community. It is noteworthy that 20 years on, Ned Nwoko is yet to build the dairy farm. And not once did the community insist that the land be reclaimed from him as stipulated in the Land Committee guideline.

“Sometime in 2015, Ned Nwoko came with another scheme. This time he needs 90 hectares of land to build a university. The whole community home or abroad, rose in unison to say no! The community advised him to utilise the initial 34 hectares for whatever proposed project he had. To make up the 90 hectares of land he is hell bent on forcefully taking, he went beyond the area mapped out for development by the community. He encroached on the Owu kindred ancestral land. The community, led by the town’s union maintained that an individual cannot be bigger than the community.

Therefore, he insisted that Ned cannot forcefully take all the community’s development land and also add people’s ancestral lands. He then resorted to oppression, intimidation, arrests and incarceration of leading members of the town’s union and leaders of thought who are vehemently opposed to his land-grabbing antics.

“He imports police from Abuja to ambush and arrest the men who oppose him, then transfer them to Abuja and have them locked up indefinitely without due process. Many of them were held in Kuje Prison on trumped up charges of terrorism and murder for months, while others were unjustly locked up for upward of two years in Agbor Prison, Delta State.

“It is imperative to place on record that the Nigerian police has become a willing tool in Ned’s malevolent schemes to totally annihilate any opposition in his inordinate quest to forcefully dispossess the ordinary people of Idumuje Ugboko of the ancestrally bequeathed possession.

“The police brigandage on Ned’s behalf came full circle when in the wee hours of Saturday 18th July, 2020 they desecrated the sanctity of the palace of Idumuje Ugboko. About 15 vehicles loaded with heavily-armed men, they tear-gassed the whole surrounding, smashed doors and destroyed the palace buildings before they abducted a sitting monarch, in the most ignominious fashion.

“The utterly humiliated community will later learn that trumped up murder charge has been brought against the king by Ned Nwoko and his cronies. This is after he was locked up in a police cell in Asaba.”

The people of the community are demanding justice for the treatment they have been subjected to by the former lawmaker.

Nwoko could not be reached for comments as of the time of the report.