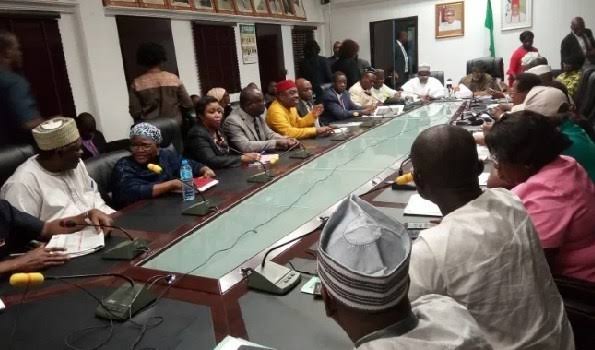 The cash seeks to address the issue of earned allowances and ”revitalisation of universities”.

The federal government, on Friday, made some concessions to university lecturers (ASUU) when it offered N65 billion to Nigerian universities to address some of the lecturers’ demands.

The government also agreed to pay the lecturers their outstanding salaries using an older payment platform, GIFMIS, different from the controversial IPPIS.

The N65 billion seeks to address the issue of earned allowances and ”revitalisation of universities”.

Giving a breakdown of the N65 billion after a meeting between both parties, the minister of labour, Chris Ngige, said the Accountant General of the Federation has offered to release N40 billion “or in the alternative, N35 billion to be shared by all the registered trade unions in the universities after providing necessary evidence of having earned the allowance.”

“The FG reiterated that her offer of N40 billion or N35 billion, whichever is accepted by ASUU, was for all the universities’ unions. ASUU had proposed that N40 billion be paid immediately for all unions,” he said.

According to the minister, both parties held fruitful discussions and “government moved from their initial N20 billion for revitalization fund and 30 billion is now for earned allowances in the university system.”

“We have moved and brought on the table N15 extra billion and by that, a proposal in one basket for N25 billion Revitalization and N40 billion Earned Allowances for all the unions in the universities,” he said.

“While the second basket offer is the issue of revitalization getting N30 billion and Earned Allowances getting N35 billion. So the offer has been made, it is in this document and ASUU is supposed to come back to the government with acceptance on either or one of the offers,” he said.

He said the government has shifted its position as demanded by ASUU on the funds for the revitalization of public universities and the earned academic allowances; as well as on the payment of outstanding salary arrears.

Visitation Panels
Speaking on the constitution of visitation panels for public universities, Mr Ngige said the panels will be inaugurated in the incoming week and they will conclude their assignments on December 31.

“They will look at issues arising from the last 10 years in those federal universities broken down into 5 years compartments,” he said.

“We also have agreed on the issue of the negotiating panel of the 2009 agreement. The panel has been constituted and members have been given their letters of appointment which says they should start work immediately,” he said.

According to him, the office of the Accountant General of the Federation, the National Universities Commission (NUC) and the vice-chancellors are to working together to make sure that the withheld salaries are paid through the old method.

“The old platform, which the Accountant General’s office used in paying the salaries of university workers that were not captured on IPPIS for the months of February, March, April, May, June. They will use the same method. The Vice-Chancellors, the Executive Secretary and the Accountant General of the Federation will monitor this and make sure there are no anomalies as were earlier reported and manage the process for those payments,” he said.

Before the government introduced IPPIS to the union last year, the university lecturers were receiving their pay through the Government Integrated Financial Management Information System (GIFMIS).

On UTAS, Mr Ngige said ASUU team has met with the Nigerian Information Technology Development Agency (NITDA) “and they are working together now, so it is a work in progress.”

“The National Universities Commission is supposed to have given some kind of leverage to the test showing where the data centres should be and the rest, user acceptance and other parameters needed. They will do that again next week and work will continue.

“So we have touched most areas of differences and ASUU has said they were going to go back to their members and their various organs and refer back to the government. When they revert to us, we can then fix a date for the opening of the universities,” he said.

In his remarks, the National President of ASUU, Biodun Ogunyemi, said: “ASUU will take the new offer to its members.”

“We will give the government our response by next week Friday after discussing with our members,” he said.

However, a senior official of ASUU who asked not to be named told PREMIUM TIMES Friday night that the government only paid the universities teachers with GIFMIS in January and February.

He said the government paid the workers through IPPIS in March, April and June.

“We did not register on IPPIS and they paid us on it,” he said.

ASUU embarked on a nationwide strike on March 23 to demand the revitalisation allowance, Earned Academic Allowances (EAA), renegotiation of the 2009 agreement, visitation panels, among others.

The union also proposed the University Transparency and Accountability Solution (UTAS) as a replacement for the controversial IPPIS.